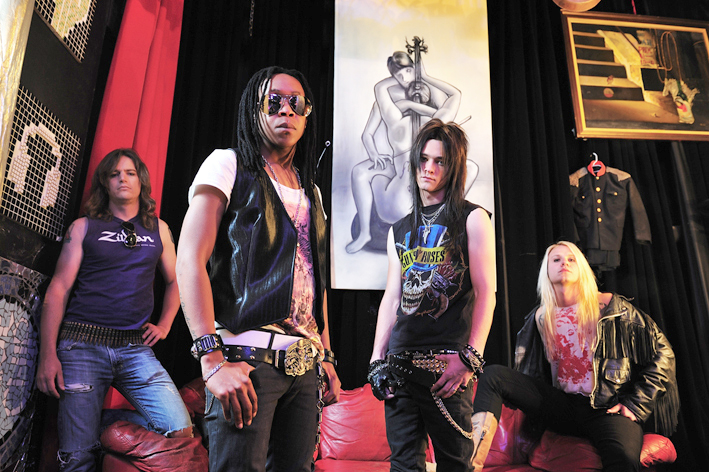 4Q Rockband is a independent hard rock/glam band from South Africa, and I was sent their lead single from the upcoming debut release yesterday via my Music XRay account. You wouldn’t expect an epic chorus of this level from a young glam rock/pop punk band, but the soaring harmonies and catchy guitar hook of 4Q’s “I’m Hoping (The Final)” transcends it’s own genre. Although the band’s image could definitely be seen as cheesy, that goes with the territory in glam rock – it’s what Motley Crue and their co-horts always strived for, along with some serious hard driving sleaze for good measure. They also manage to blend some modern radio rock and pop punk into the mix pretty seamlessly.

“I’m Hoping” follows the typical power ballad formula and succeeds wonderfully. Strong vocals by lead singer Kel Makhaye and great harmonies by the band make all the difference and give this song real hit potential. The production is high as well, which is a necessity when competing with the big players. Any mainstream hard rock act in their genre would do very well with a single like this. Radio rock is not typically my thing, but I respect what 4Q has done here and can definitely appreciate the talent in this band. Novelty or not, 4Q Rockband has impressive chops that go beyond expectations.

Listen to “I’m Hoping (The Final) and decide for yourself at 4Q Rockband’s official website.

[…] be willing to bet that these guys live it up, and I fully support it. I previously reviewed “I’m Hoping”, and was impressed, but THIS, in my view, is 4Q Rockband’s ticket to […]

Any time, guys. I look forward to hearing more of your music!

Hi James, thank you very much for the awesome review. We are amped at all the good things you said and it is an inspiration for the future that lies ahead. You can e-mail us your e-book to info.redroomrecords@gmail.com.

Be on the look-out for our 2nd release via MusicXray!
All the best
4Q Rockband