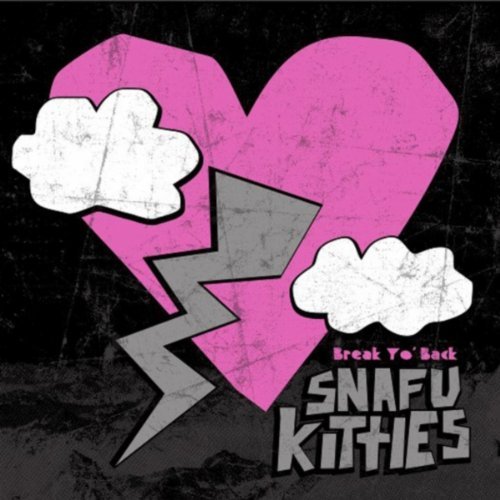 SNAFU Kitties “Break Yo Back” EP is the latest album to be sent my way, and it’s an impressive debut with a funky, jazzy take on pop/rock inspired by the Red Hot Chili Peppers, No Doubt, The Beatles and Fiona Apple. This combination makes for pop/rock that is both experimental and interesting. Lead singer Jessie England is both sassy and charismatic – she’s a pitch perfect vocalist and also has the attitude and swagger to be a magnetic rock star.

There is a maturity evident in this band that I just haven’t seen in most bands that attempt to merge pop and rock music. I tend to get a lot of submissions from bands who have been “industry coached”, and as a result they sound like they’re trying to be the next Nickleback or Blink 182, and the result is annoying and unlistenable on multiple levels. SNAFU Kitties do their own thing by paying a respectful homage to their influences but at the same time blazing their own path, adding more depth and jazz to their sound than most bands of their ilk. Every song is a winner, but the highlight, and the real stunner, is “Spider Song”, a venom-spitting tale of a relationship gone awry. Just about any serious music fan could find themselves relating to the emotions expressed here, regardless of your life experience.

“After All” opens with some wonderfully Beatles-inspired melodies only to elevate the listener further with some serious funk on the chorus. Right out of the gates, the band is infectious. It sounds like something that should be played on the radio, although in many ways it’s too good for the radio format, given that most radio is repetitive nonsense, and most of us have moved on to music blogs and personal playlists. So then, add SNAFU Kitties to your playlist and you’ll be just fine!

“Alive Again” is another number that features some beautiful piano playing in the verses only to once again lift the song to new heights on the chorus, where the whole band unleashes with some interesting rhythmic choices and some perfectly united guitar and piano tradeoffs. “Break Yo Back” is the most catchy track on the album, and it manages to be both dance-floor worthy and interesting at the same time. Jazz, funk and pop meet in this intriguing song, and it’s a testament to this band’s unique perspective.

There doesn’t seem to be any pretension here – just strong music with flavour and depth. SNAFU Kitties is highly recommended for fans of Fiona Apple, Radiohead, early-era No Doubt, Tori Amos, Jamiroquai, and Red Hot Chili Peppers. Take a listen for yourself at their official website or their Facebook page.