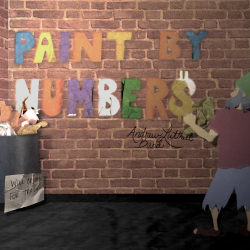 Gutwrenching and emotional with a traditional bluegrass/rock vibe, the Andrew Luttrell Band impress with the very atmospheric and foreboding “Landscape Plains”, a cut taken from the new release “Paint by Numbers”. Andrew Luttrell’s voice is reminiscent of seasoned artists like Blue Rodeo, Neil Young and Tom Petty, and the music fits in with the same aesthetic. Throughout the album, there is plenty of quirkiness in tracks such as “You’re Stealing My Car”, although the snappy lyrics could have benefited from a mean rock n’ roll groove here. “Sara Sota” shows some serious rock range with it’s heavy licks and greasy, low down delivery that would impress anyone holding a bourbon on the rocks.

“Draggin’ That Line” is another modern rocker with guitars similar to the White Stripes and the Black Keys. The band is gelling and the whole production is strong. “Blink” is a solid folk outing that shines the light of hope on the proceedings, while “Making Senses” is a fitting, although non-climactic closer. All in all, Andrew Luttrell and his band display good musicianship and a strong sense of groove, if not a whole whack of originality on this outing. Luttrell shows potential as a strong storyteller, most evident in the emotionally charged lead track “Landscape Plains”, which is recommended listening.

You can pick up “Paint by Numbers” at CDBaby.