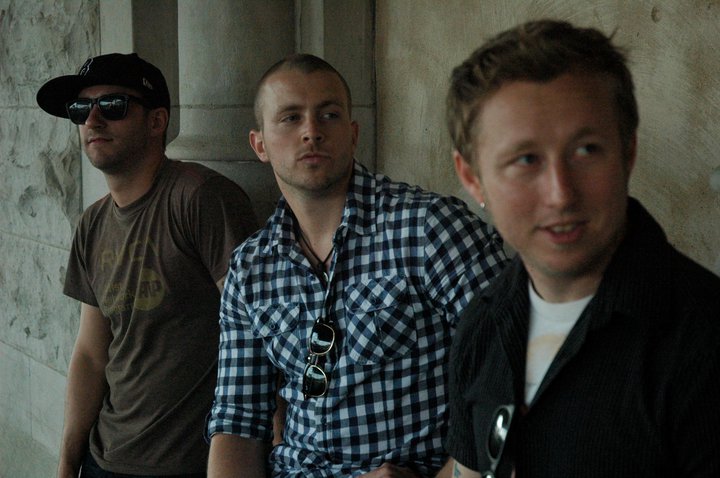 Today’s exclusive is with rock n’ rollers Ballroom Boxer, who come complete with poppy hooks, old school punk influence and soaring harmonies. Like a cross between the Misfits and Weezer, their music is catchy and unique. Ballroom Boxer has a very melodic, old school approach to rock n’ roll. How did this approach develop form the origins of the Whiskey Drifters?

Mike Altier: We had more of a fuzzy, alt-western-type-rock thing going with the Whiskey Drifters. So we built on that, hence, the old school rock we loved and grew up on. Then we decided to coat with this surfy, pop that screams Summer and freshened it up with a mix of the raw power punk we like as well as the singer-songwriter stuff that resonates with us.

Donnie Renner: We’re all really inspired by older rock n’ roll, but we try to keep a conscious effort to do things with a modern twist. We’re big fans of the newer rock, punk, indie scene and we try to implement that at much as possible.

Dave Altier: Mike and I have always loved blues, western and alt-country influenced music. That’s how the Whiskey Drifters came about. We wanted to bring those elements together and mix em with more modern, edgier rock n’ roll music. That has never left us. With Ballroom Boxer, the hooks are catchier and the music is more dynamic.

How did the “Summer Mixes & Backseat Dreams” EP come about?

Dave Altier: We had an opportunity that came to us from Ante Up Studios in Cleveland around the same time we were searching out a studio in Chicago. Mike and I rehearsed the songs with our bass player who was in Akron, OH and guitarist in Nashville with some pretty raw ideas that were sent out in an email. Each time I checked my inbox and would have something from one of the guys, I could hear a song develop and evolve.

MA – Like anything, this EP came about in the middle of winter, after a glass of scotch and a James Dean movie marathon. We were longing for summer and the good ol’ days when summer meant staying out past dark, riding your bike and chasing girls. That’s pretty much it. There’s a lot of heartache, redemption and wild times baked into this EP. Its about remembering to have fun.

DR: Connecting with fans; whether it’s putting up new content, communicating via twitter or facebook, or even writing a personalized song for fans, the more fans get to know us as musicians and people, the more connected they become.

Dave Altier: The Bronx. I’ve been following The Bronx since I was in High School. In ’03, they came through Cleveland with The Distillers to a small club with low ceilings and a stage that was only a few inches off the ground. They made everything so huge in there though. The lead singer (Matt Caughthran) jumped off stage at one point, walked up to my friend who wasn’t familiar with the band, and sang (screamed) half of a song in his face. It was an intense show and I always try to play with as much energy as those guys do every night. And now the band makes really impressive Mariachi records under the name, Mariachi el Bronx when they’re not making rock n’ roll stuff. There’s so much talent in their writing and their playing abilities. They always surprise me.

DR: Personally, I really admire Eddie Vedder. I think he’s really figured it out on how to stick around for so long and remain and classic and relevant voice in rock. I also think there aren’t many people that create music with more honesty than him.

DA: Use all outlets available to reach people and put more than just your music out there. You can let your music speak for itself but having a social presence is key right now. You have to sell yourself along with the music. The best thing about music today is that you can target the people that you want to listen to your music pretty effectively with social media advertising. It has never been as easy or inexpensive to establish a fan base, big or small.

DR: Don’t accept failure, and keep playing because you genuinely enjoy doing it. I think any band that has ever made it really followed those 2 things along with a dash of luck.

How can music fans keep tabs on Ballroom Boxer?

DR: Tweet us, facebook us, email us, youtube us. We love social media and the direction its headed with music by its side so we’re gonna stick close to our keyboards for our fans.