Blacklist Union – Til’ Death do us Part 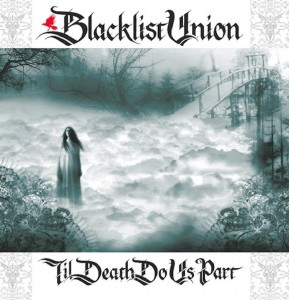 Blacklist Union is a musical project that hails from Hollywood, CA headed up by Musical Mastermind Tony West and company. This 5 piece Alternative Hard Rock Band have been making a name for themselves regionally and internationally. They have received critical acclaim from many music critics and webzines around the globe thus far in their musical career and are known for their explosive live performances.

“Till’ Death do Us Part” is their latest release and the result though far from a self-indulgent ego trip, rather a moving and elegiac artistic statement from start to finish. This is not your overly predictable Ramon Noodle Indie Rock band. Instead West and company could be classed as a 3 genera band: Alternative Rock, Hard Rock and Punk-Indie Rock. BU have way too much precision and clarity to live in the shadows of overly-predictable Indie Rock. Indeed this is clearly evident in songs like the title track, “Alabama Slammer” “I Do” and “Game Over” which methodically ups the ante to a very respectable level of catchy musical craftsmanship and addictive hard rock that transcends typical pigeonholing. Indeed there’s reason why this band is becoming more and more popular each and every year. The music is also commercially viable with a fresh sound and a rock hard-rocking vibe that holds the attentions span of the listener perfectly. In a nutshell this is The Motley Crue meets Green Day meets Alice Cooper. The 11 song line-up appeals to many listeners with a wide variety of musical styles – but it one hell of a ride with a powerful voice for Rock n Rollers out there who have had enough of the musical status quo.

The strength of BU is the fact that every word out of Tony West’s mouth is for real. Why? Because he’s for real. He no doubt lives the life of a true vintage rocker and it comes out in his music. I would imagine in time we will hear more from this amazing band in the near future. No doubt Blacklist Union have carved a marketable niche for themselves thus far setting them up for marketable success over the years to come. I would not be surprised to hear them headlining the Warp Tour many years to come. But for now I can honestly say this is one artist that clearly gives you a musical snapshot that is highly original, unique and dare I say dangerous and chaotic in scope. What else would you expect – BEWARE IT’S TOTAL MAYHEM, IT’S BLACKLIST UNION!