Brooklyn Electropop artist Paul Feder has announced the release of new single and music video “Lose My Mind”, out July 23, 2021 on digital platforms. “Lose My Mind” is the first single to be released from Feder’s debut solo EP “Nightwalk”, out via Aion Records on August 20, 2021.

“Lose My Mind” is upbeat, melodic and synth-driven. Its release is accompanied by a surreal, dream-like walk through the city in the official music video.

More about the Music Video
The music video for “Lose My Mind” was created shortly before the pandemic in the streets of Gowanus, Brooklyn.  During filming, Paul Feder and Eric Martich (aka Permian Strata) employed a generous dose of half-speed videography – Paul would sing the song at double speed while Eric shot the video at 60fps, and in post production, the speed of the footage was halved.  As a final step, the Permian Strata’s wild visual effects were added.  The effects themselves were created very manually, layer by layer, shot by shot.  Eric Martich describes his process here:

The first step was generating abstract patterns, using the audio as an input. With the LZX Industries Sensory Translator module, I converted the audio to control voltage, and fed that into the LZX Industries Fortress, which generates graphics in the style of an 8-bit computer. I used its shift register mode to create shapes that mirror the architecture of the city, paired with its “neon” color palette, which matched the bright colors of the street art featured in the live footage. Those shapes were then patched to the LZX Industries Memory Palace, which generated an internal feedback loop, creating the illusion that the shapes were receding into the distance.

The next step was manipulating the live footage in Adobe Premiere to make part of each shot transparent. In most cases, I did this by applying a chroma key effect tuned to the blue of the sky. In other shots, I keyed out any parts of the surrounding landscape that were a solid color. Then, I composited the abstract patterns behind the live footage, making them visible in the transparent areas.

Once the digital effects were nearly finalized, I added analog effects to a few of the shots. This involved burning those shots to DVD, and plugging my DVD player into the BPMC Fluxus and plugging the Fluxus into the Blackmagic Intensity Shuttle capture device. With some exploratory knob turning, I distorted the analog video signal until it bloomed into unexpected colors. I captured multiple takes of these analog effects, and then inserted the best takes into the final edit. 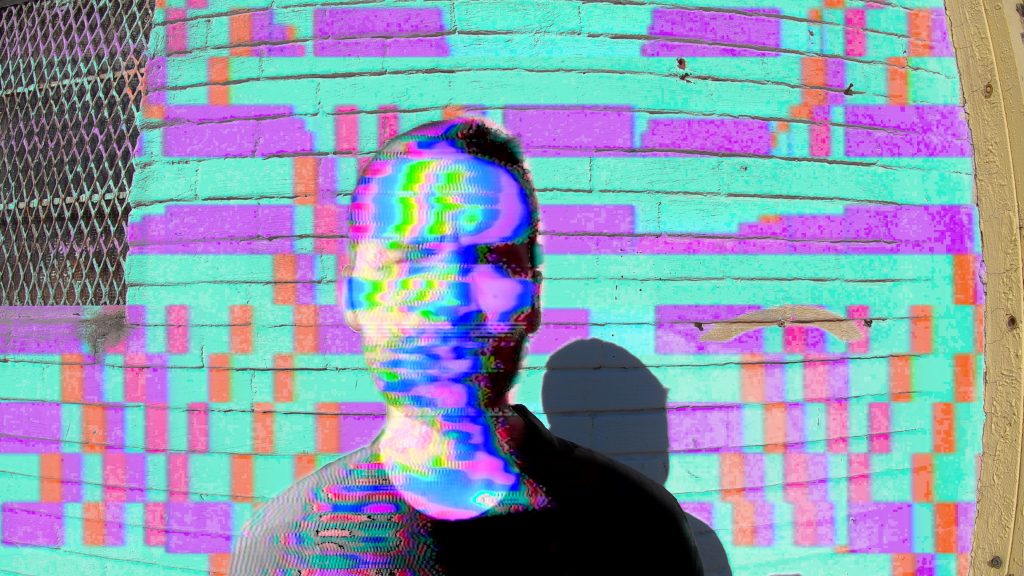 Order “Lose My Mind” on Bandcamp.

Stream “Lose My Mind” on Spotify.