“Can We Get In Pitchfork?” 6 Philosophical Reasons Indie Bands Fail

“Can we get in Pitchfork?”

At Independent Music Promotions we are lucky enough to be exposed to an extremely wide variety of independent bands, and it often seems the difference between a band rising fast, sinking like a stone or staying motionless in place comes down to the ideas and beliefs held by the band members themselves. Just like in life, ideas, philosophies and belief systems can cause us a lot of trouble internally and externally, leading us to do and think all kinds of irrational things. Some of the following list will be concrete things that many artists tend not to think about, and some of it will include harmful ideas they hold dear.

All of them I see first hand, and often enough to be inspired to share this article.

Possibly due to growing up with long-held cultural expectations going all the way back to Elvis Presley and the Beatles, our collective idea of what it is to “be in a band” or “to make it” generally involves visions of superstars gracing the stage in front of 50,000 or so obsessed followers.  It’s fine and good to have an image in your mind of your goal. The problem is, this goal, if held too close and without the proper neutrality, can taint all the building blocks along the way and cause bands to implode early when they were just on the verge of getting somewhere. Artists who start off wanting everything nearly always grossly underestimate the work involved, and this leads to disillusionment and despair. There’s no such thing in reality as “all or nothing”. You are where you are so start from there.

This is a true poison. If you’re an honest, true artist, I congratulate you. In my view, you’re a wonderful thing for this world. However, just BE an honest artist. Don’t THINK you are one. It will get in your way, trust me. It’s the same as the man on the path to enlightenment who thinks “I’m a great yogi”. He won’t achieve his goal. Thinking “I’m a true artist” tends to solidify subconscious beliefs about lack of success, “the Man”, and the army of commercial sods out there that you’re up against. It can make you feel alone in a music industry that sometimes seems to be a more dangerous environment than the Democratic Republic of the Congo. Don’t let yourself get polarized. The Doors are considered by many to be true artists, and yet they also had the business drive to make it. They called in to Los Angeles radio requesting “Break on Through” to get their foot in the door. They didn’t expect anyone to find them because of their unique gifts.

But it doesn’t help.

The tough thing to accept, and this really is a bitter pill to swallow, is this. No one cares about your story. They may understand. They may empathize. But no one really cares. Once you know that, once you TRULY know that, it’s liberating. You can face who you actually are and where you actually are with courage instead of excuses.

Your band is a BUSINESS. In no other business are people allowed to say “I don’t have money but I want success”. The landlord would kick you out in a second. It’s only independent bands who have such an issue with investing in themselves.

I’ve been asked this question by many artists who are just starting out, and of course, there is always that chance. However, there seems to be a looming expectation attached to the question that has some troubling residue. One artist advised me that he would accept interview requests from publications like Pitchfork or Rolling Stone, but I would have to get his permission for “smaller publications”. Do you see the issue here? If you don’t embrace and respect ALL the media, including the tiniest independent music blogs, you’ll most likely be very disappointed with your results. Most bands contact the top 50 music blogs after finding a list somewhere and ignore the rest of the blogosphere. In their minds, they’re simply too good to waste their time on small publications. Pitchfork represents mountain view thinking.

Not everyone will agree with me on this point, and it’s fine because my point of view is subjective, and based on the kinds of music I personally value. I often receive submissions from bands who quite obviously try to sound like their idols, whether that be Creed, Jack White, Lil Wayne, or Nickelback (shudder). While this can end up being a successful strategy for some, most media personnel will just see you as a clone. If you really get to know publications like Popmatters, Consequence of Sound, Pitchfork, and Filter Magazine, or checking the latest festival lineups, you’ll see a trend happening that leans heavily towards the innovative.

This goes against what most music promotion guides tell us. They tell you to be coachable and to listen to industry guidance. Write radio friendly songs. But I don’t think that’s true. You need to be genuine, and it’s not genuine to copy someone or try to cater to an industry for financial or vanity reasons.

Don’t compromise your art. Run with it. Do something vital, dangerous, meaningful, and most of all, honest.

With the prevalence of endless music authorities of every kind, independent artists have in some cases adopted a “wait in line” mentality that can be quite harmful. You’ve submitted your music to every blog on Hype Machine and applied for every opportunity on Sonicbids. No one has responded. Now what?

Most music publications receive hundreds of submissions per day. More than likely they won’t even listen to your music. Some blogs appear to be open to independent artists but are effectively shut down to the outside world. The idea of sending your album to all the respective “review queues” and waiting for something to happen, playing by the rules as it may be, just doesn’t work.

There is a commonly held subconscious belief amongst musicians that pictures a level playing field of sorts. The music industry, as we like to think of it, is a giant, endless panel populated by A&R representatives ready to listen to every band, one at a time. But the reality is that very few people have the time or will make the time to listen to your music, let alone spread it in any way. You need to understand this and take control of your own progress.

Reach out personally to any genre expert who could possibly help you. Take the time to personally connect with as many people as possible. Hire freelancers to get on your side and possibly cover your band’s new release. Offer something in return. Donate to blogs you respect and they will appreciate it. If you support them, they are much more likely to support you. Yes, I said it. It’s the truth. Most bands think each website has a whole bunch of writers waiting with all the time in the world to write blogs about them, but people generally want something for their time, whether it’s money to keep doing what they’re doing, cross-promotion, acknowledgement of their work, or just an actual human conversation instead of a robotic press release.

Advertise. Research micro-job websites. Reach out to respected licensing companies. Contact writer’s individually and let them know which pieces of their’s you enjoyed rather than going through the main channels. Start a blog of your own and offer cross-promotion. Follow up when appropriate. Target non-music specific publications that have music sections.

There are thousands of things you could be doing while you’re waiting in line, but never just wait. 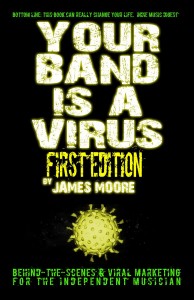 For more information on effective music marketing for independent artists, read my book “Your Band Is A Virus”.

6 Replies to ““Can We Get In Pitchfork?” 6 Philosophical Reasons Indie Bands Fail”

I would say that is bang on. And I agree with the fact that more and more gigs and signings these days are bands who innovate. It seems like a natural progression for a music industry that is getting a more smart and wider audience.

As interesting as it is useful, thanks a lot for writing it 🙂

Pretty shocking stuff, James. The true artist part stuck with me in particular. Ideas are shifting. Thanks for this article.