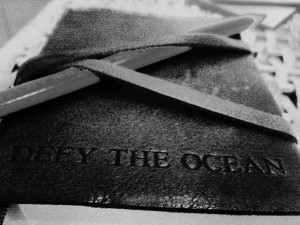 Defy The Ocean are definitely making waves around my water cooler lately, thanks to their new EP entitled “Myopic”. For those who miss the early days of heavy grunge music like Tool, Helmet, Silverchair, Soundgarden or Alice in Chains, then allow me to proudly announce the arrival of this epic duo, which consists of multi-instrumentalists Chris Theo and Marcos Economides.

The artful genre that you may have missed over the years is now right here waiting for you, only with an added twist and a greater metaphorical punch to the genitals. Simply put, it’s way freaking better.

As if being juggernaut musicians weren’t enough, Defy The Ocean is also a band with a message. A great one, at that. The Myopic EP is a concept album that revolves around humans’ role in declining species biodiversity, which is far more crucial of an issue than it has ever been to date. Each song tackles the issue from a particular human cause. It only makes sense that the duo is currently involved with an organization called Sea Shepherd.

Established in 1977, Sea Shepherd is a non-profit marine wildlife conservation organization.  If only more independent bands out there were pro-active like this, instead of just trying to get rich or laid. It’s a selfless pursuit that gives Defy The Ocean a raw sort of energy. Not only raw; but honest.

And now, we get to the music.

Chris and Marcos are incredibly gifted songwriters with enough skill, passion and attitude for many full length albums to come. The guitars are atmospheric and full of texture. The percussion section is tight and in the pocket. The vocals soar as much as they growl.  The lyrics are intelligent as well as articulate. There is so much diversity to be found in “Myopic”, which is astounding; considering there are only four tracks on the EP. At times, I felt like I was listening to a full length disc.

Defy The Ocean opens things up with the masterfully written heavy song “Neolithic.” First of all, it erupts with a rhythmic flair that is akin to bands like Helmet and even Thrice. Chock full of melody and aggression, the song transitions into an eerie down-low verse line where Chris’s raspy seething spills out over a simplistic drum line. It then moves into a melodic metal chorus that features some stellar harmonic work and operatic vocals that would make Chris Cornell weep with joy.

Speaking of Chris Cornell, “Invaders!” reminds me of a far more evolved “Fell On Black Days.” The listless emotion in Chris Theo’s voice is pained and melodic over some eerily clean arpeggios. Much of this song is very subtle, even the heavy sludge-like parts, but full of harmonies and big sound. Epic is the word here. There is a lot of that going on in this EP

“The Hunter” opens with a super unique rhythm over an equally unique guitar line. This track is dissonant, even off key at times, but I believe that was intentional. You’ll hear a lot of AIC aggression in this track, as well as some effective math progressions that made me think of old school Mudvayne.  “The Hunter” is a brilliant, thought provoking masterpiece.

As far as production is concerned, this album is very well mixed. Everything is balanced and audible. I enjoy albums that let me hear everything.  Being an ear-oriented musician myself, I prefer to learn riffs directly from the album.  Defy The Ocean’s production made this very easy for me.  Everything was right out in the open.

Defy The Ocean plans to donate all their albums sales to charity. If that isn’t an incentive to pick up their album, than the music itself should be. Simply put, you are missing out if you don’t pick up “Myopic”. You’d be helping out a great cause and you’d have some awesome tunes to crank on your stereo.

Or, you can stream the album on Soundcloud