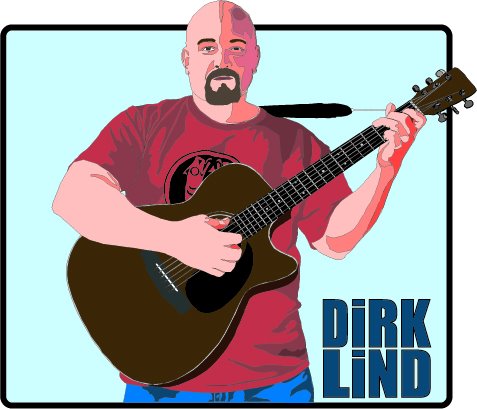 Dirk Lind is the type of honest singer/songwriter I respect. Not necessarily because he’s going to change the world or is exploring never-before-seen sonic territory, but because he’s contributing to what I feel is a strong and open communication of the human soul. He plays from his heart; something that the late Bill Hicks would admire. He is an artist expressing himself, pure and simple. A man with a story to tell.

In my line of work, I’m exposed to many artists every day who are trying to become something, something other than themselves. They want industry coaching, to be moulded and shaped into something, anything as long as what comes out of the pipe can sell records. It’s because of this trend that perhaps we can ironically be thankful. It’s this trend that makes songs like Dirk Lind’s “The Winter Line” that much more affecting in comparison.

“The Winter Line” is the lead track off Dirk’s 2011 album entitled “Division Street”, and it’s a piece with an energy of grace and beauty. It’s absolutely beautiful; music you can genuinely feel. There is only dedication and devotion in his lyrical expression here, not the usual dramatic relationship fodder we’ve grown accustomed to, and it comes across as powerful rather than cheesy. “Delilah” is another very worthwhile track that holds it’s own; once again beautiful and heartfelt. The words show a brilliant lyricist with the lines “Oh, I’m blinded by the the spangled light of day. Oh, I’m on the edge of throwing everything away.”

“Lovers Left Behind” continues the sad and sweet tone of the album, adding some well-chosen backup harmonies, bass, lead guitar and jazzy drums to the mix. Like a hats off to the Americana and folk greats of yesterday, this sounds like a classic, like something you’ve heard before. There is a sense of wonder and appreciation for life in Dirk Lind’s voice that you rarely hear, and at the same time, when he says “Some drink to forget. I drink to remember you. Someone lost along the way. Someone lost. Someone found again” you feel the saddening loss of a loved one. This music is as affecting as can be.

“Stone” creates an atmosphere different from the other tracks, with tremolo-infused guitars, reverb and piano backing up Dirk’s slightly raspy melodies. The shift into electronics works for him, because he comes across as an artist with no boundaries. He could easily do what Sufjan Stevens or Thom Yorke do as far as experimentation, but he chooses a more subtle approach, more like Leonard Cohen, and there are elements of Mr. Cohen’s influence here. Other highlights from the release include the intentionally slow-paced Bob Dylan-influenced “Division Street”, which finds Dirk Lind singing “Everybody got somewhere they got to be…Everybody got something they want to keep for themselves”. Truthful lyrics once again become an appropriate and powerful focus. “Don’t Let Your Troubles Be Your Guide”, much like Paul Simon’s best work, puts a positive, yet hard won message of wisdom into an upbeat and almost poppy format, and it’s works wonders.

Dirk Lind as an artist is like the wise man who you’re actually inclined to listen to. Maybe you just met him at the right time, or maybe you were ready to open up and leave your cares behind. The door is open, and trust is naturally there. He is a truly great musician and storyteller, and I will be eagerly anticipating his next album.

Dirk Lind also has a great approach to presenting his music, opting to make is accessible and easy to download – does free work for you? You can stream and download his music below, but I encourage you to also support the artist by purchasing his music through the major digital outlets.

For a great performance of “The Winter Line”, check out the video below for a clip from the Spokane Folk Festival.