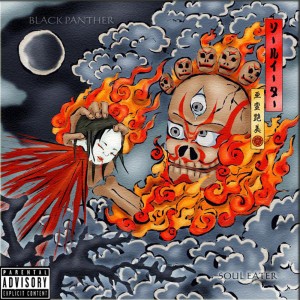 Black Panther is an example of an indie artist who has gained a massive following through (he has almost 11,000 Twitter fans) hard work, viral marketing and music worthy of any loud stereo system. His new release “Soul Eater” is an absolute opus of dark, conscious hip hop and soul music. A concept album, “Soul Eater” is described by BP himself here.

“It has a central figure (John Smith) he leads a very boring life he tries to escape from. He works at an office job, and finds that his only escape is when he happens upon this talent/ curse. When falls asleep he creeps into the dreams of others and lives their lives to its fullest, but finds out that in order for him to occupy their life the can no longer exist, and all their fears, loves loss becomes a part of his own memories and eventually drives him insane. Every song is another life he has stolen and creates a border picture of the lives he’s stolen and the darker side of his own.”

If hip hop is to genuinely evolve, you can count on DJ Black Panther being one of the artists to lead the way. This is not typical genre-specific material by any means. As colourful as a DMT experience, “Soul Eater” is a must for fans of not only hip hop, but of good music in general.