When Your “Kid A Mnesia Scarry Edition” Vinyl Finally Arrives 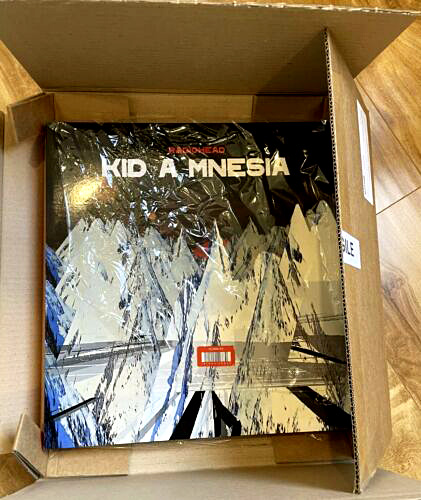 For nine months it was lost at sea.

Stuck on a box pile in a shipping container somewhere off-dock in Europe was my copy of Radiohead’s Kid A Mnesia — “the Scarry Edition.” Probably on top of identical packages. All trapped in transit in some perfect storm of backlogged pandemic loot colliding with an oil and worker shortage, or something. Who knows?

The box weighed over ten pounds, but when I got the knives out and opened it all I saw was weightless glory. Kid A Mnesia is the remastered conglomeration of Radiohead’s back-to-back releases, Kid A from 2000, and Amnesiac from 2001 — plus a third collection of unreleased tracks from the same era titled, Kid Amnesiae. Three cream-colored vinyl, six sides.

The Scarry Edition also included a fat artbook (“The Scarry Book”) filled with every scrap piece of imagery put together by singer Thom Yorke and artist Stanley Donwood; and Fear Stalks The Land!, a paperback of zonked poetry and scribblings also by Yorke and Donwood. Any moderately obsessive Radiohead fan will produce a puddle of drool at their feet upon absorbing this holy bulk.

First classics of the new century, Kid A was released in October 2000, and Amnesiac in May 2001.

Both were forward-thinking musical masterpieces of their time and of all time since. Very few albums have reached such a level of cohesion with experimental instrumentation, artistic integrity, relevancy to the times in which they’re constructed, and above all, powerful songs. The back-to-back releases weren’t only groundbreaking in song and sound, but also with the packaging and imagery that went with it. It’s a tornado of new media — digital art, photographic manipulation, 3D design, scanning and layering.

Kid A and Amnesiac were the response to the band’s landmark third album, OK Computer, and the whirlwind it shuffled the band members through. Released in 1997 OK Computer catapulted Radiohead into new bizarre heights. It reignited the possibilities of what rock music can achieve, what it can sound like, be about, and the depths that it can reach. It’s a complete album with ebbs and flows, melody and rage, all the passion and musicianship born from a collective. But while OK Computer was a brilliantly executed set of interlocking songs with finite structure, Kid A and Amnesiac sought out any method to twist and bend the design.

They took genres that were blossoming in the mid- to late-90s and squelched them under foot.

The neon rave scene of the UK was leaking into the influence of a lot of rock bands like Primal Scream and Spiritualized. Acid house, electronica, trip-hop, ambient music and post-rock were all coalescing at the time. Radiohead shifted into new territory. They didn’t just adopt a sample, or add a breakbeat outro to a song. The fell in headfirst almost fully drowning out the guitar, or at least its universally-known sound. Guitarist Johnny Greenwood experimented with giant synthesizers, while his counterpart Ed O’Brien lorded over a dinnerplate of guitar pedals.

The shift is immediately evident with Kid A‘s opening track, “Everything In Its Right Place.” The keyboards are cool, and they descend slowly upon the listener. Forty seconds later and it’s all around, swimming speaker to speaker. Yorke’s voice gets lost in a digital ghost lag and you wonder if the song has picked up some unknown frequency. The remastered vinyl is powerful. With the volume knob up a tick higher than usual, these songs come through like having a gallon of milk poured on your head. Everything so pristine: the orchestral onslaught in the latter half of “National Anthem”; Phil Selway’s drums darting on “Morning Bell”; the strings on “How To Disappear Completely” blowing through the ceiling; and all the little back-end samples and whispered echoes.

The artwork of “The Scarry Book” is eerily prescient.

Flipping through the pages is like stumbling upon the hidden scrawlings of some jaded time traveler. Together and separately, Yorke and Donwood worked on the pieces over the course of 1998 through 2000. There are images of tall towers, splices of buildings at all angles like falling, unidentified explosions, flight paths, unknown creatures grinning.

It’s a document steeped in all the paranoia of a new century, all the doubt of an unsure future. The artistic answer to a new era of mushrooming problems: social anxiety and isolation, terrorism, preening globalism, the internet’s spawning and then walking on land, cratering trust in governments. Twenty years later and some of the imagery is almost too on the nose for today.

Of course the iconic Minotaur bounces around the pages. The sketch of a horned animal crying distills the entire package into a single figure. This critter with its sharp anatomy and confrontational exterior is remarkably subdued, bent over, ailing, and with teardrops the size of its nose pouring out. The vulnerable minion of a demon army, with emotions uncontrolled. As far as Radiohead iconography goes it’s second only to the grinning Bear. May I run through the forest clutching these documents as the world falls into total darkness.

Wake up from ‘A Mnesia’: Radiohead Side Project The Smile to Put on a Worldwide Livestream this Week in Addition to ‘Kid A’ Anniversary