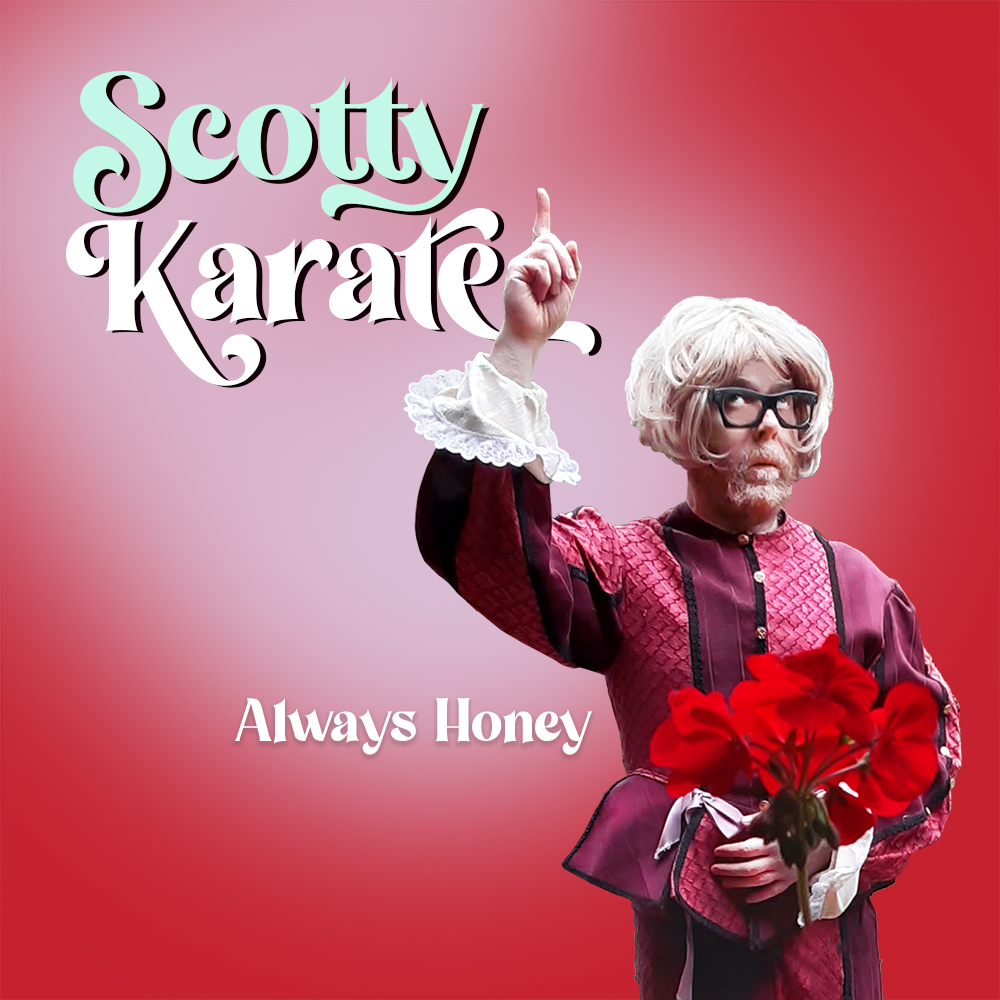 Scotty Karate is a local legend in Michigan, with both punks and cowboys claiming him as their own. His iconoclastic fusion of country honky-tonk style and irreverent proto-punk swagger has contributed to his cult status and mystique, culminating in Dark Horse Brewery naming an award winning beer after him.

About the album:
Scotty Karate‘s new record displays a confident artistry for writing great tunes in addition to his natural ease as a live musician.  Recorded live with only a few overdubs (keyboards by producer, Darrin James), the record is mostly “one takers” and capture’s Scotty Karate’s wide range of sounds and emotions, from the raw swagger of his punky “one-man-band” honky-tonk to the biting wit and intimate sensitivity of his beautiful balladry.

Proto-punk Country-Alt legend Scotty Karate was born in Oklahoma and raised in Michigan.

In the mid 90’s his band the Plumbobs toured extensively and recorded a Budwieser radio commercial with their Detroit Municipal Recordings label mate, Goober and the Peas, which included pre-fame Jack White. Unique artistry and unabashed rock ability led Scotty deep into  the world of Honky Tonk and Tejano around southwest Texas where he recorded his first solo demos with Grammy winner Chris Perez. In 2004 Scotty Karate moved to New York City and started Scotch Bonnet with childhood pal, Derek Stanton, of Awesome Color. Ultimately, Awesome Color was signed to Ecstatic Peace and Scotch Bonnet became a recording project aimed at creating total T.Rextasy/Bowie-esque americana. John Peel,  Britian’s most influential broadcaster, played from these recordings weekly on his  BBC Radio show up until his death. Awesome Color hired Scotty as a guest vocalist during  U.S. tours with Sonic Youth and Dinosaur Jr. During this time, Scotty began performing as a one man band playing his break neck paced hillbilly garage rock while keeping a live rattlesnake inside of his bass drum.

Scotty Karate released his solo album, “Get in the Teepee” in 2005. Many of the songs were featured in the  feature film, ‘Buster’ (Governess Films 2008), in which Scotty co-starred as a homeless street performer. Scotty has a history of outstanding dramatic performance and was a 2 time State Champion (Michigan) of Competitive Storytelling and Poetry. His high energy slurry of honky tonk influenced, punk-country performances inspired Dark Horse Brewery to create a beer in his name. Scotty Karate Scotch Ale is available in over a dozen states and winner of the silver medal at the Great American Beer Festival. Scotty is currently releasing his third album on Ravine Records, which displays Scotty’s wide range of sounds and emotions, from the raw swagger of his punky one-man-band form of honky-tonk country to the biting wit and intimate sensitivy of his beautiful balladry. Scotty has plans to resume touring Fall 2021, and he also enjoys playing and singing with the spooky Detroit bluegrass inspired band, The Webbs.