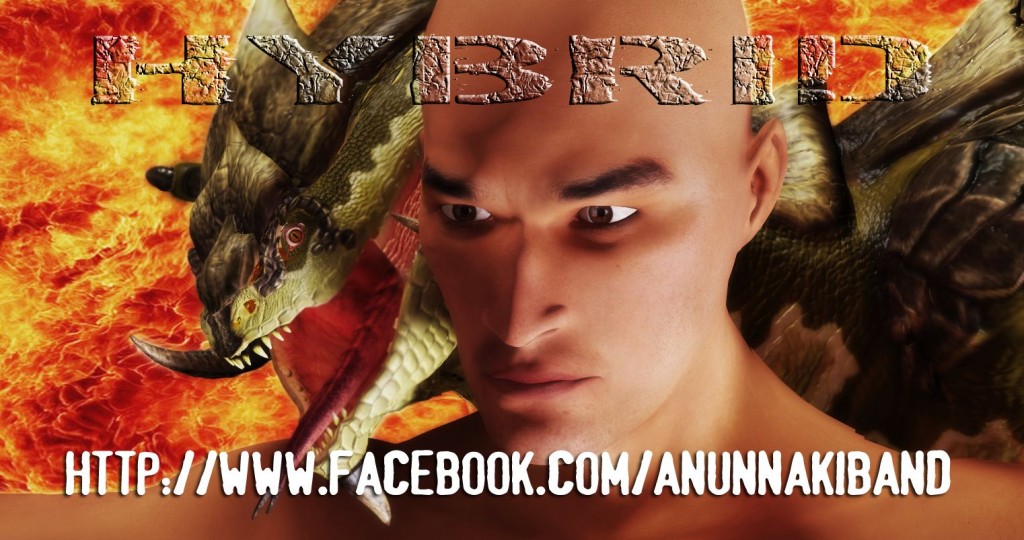 Anunnaki is a rock/progressive solo project by Mark Vanstone that contains strong gothic and metal influences. I admire any artist who puts in the effort and does everything themselves, and Anunnaki’s moody, emotionally charged music shows a lot of ambition. “Hybrid”, his new single,  is quite heavy and brooding, similar to output I’ve heard from artists such as My Dying Bride – and there’s certainly nothing wrong with that. I interviewed Mark Vanstone to talk about his thoughts on the project as well as his opinions on music.

Welcome to Independent Music Promotions, Mark. Please tell us about The Anunnaki and the inspirations behind the project.

The Anunnaki project was started mainly out of frustration of several years of professional media production mainly for corporate purposes and not having produced any of my own music for some time. It was a new years resolution to record at least one song in 2011. The reasons for the project developing into The Anunnaki was really one of my interest in finding out the stories behind the origins of our existence. As we seem to have an interesting date coming up which has been associated with one of the more ancient civilisations I decided to incorporate that into the timing of the project.

Being an I.T. professional, I embraced the internet age very quickly and I now feel that it holds the key to market entry for indie artists. There is no longer a need for artists to be signed up to a record label to get noticed by a considerable fan base. Having said that anyone wanting to promote themselves online needs to be ready for a lot of hard work and dedication to their band or project.

Online social networks have been a god-send for artists and bands. You can be in contact with many of your fans on a personal level and that in turn encorages them to spread the word about your music. These networks are much less intrusive than sending newsletters or texts to your mailing list but also encourages artists to think creatively about how they interact with their fan base.

My earliest memories of music were things like Simon and Garfunkle which I think still has a bearing on my music now – but I soon became much more interested in bands like Bon Jovi, Pink Floyd and U2 as I was growing up. Influences from these bands are quite prominent in my music but I also listen to many very current bands and artists who mold the specifics of the songs I produce now.

In the mainstream I would have to say Muse is a front runner but I am listening to a lot of local and indie bands who are coming out with some amazingly original material. This also has the benefit that I can go and listen to them live without travelling too far.

The music industry has always been a hard market to enter and sustain a foothold in. The first step is to love what you do and know that you would do it even if no-one ever paid you for it. The other thing which any artist needs to ask themself is ‘Why would anyone be interested in what I am doing?’ – people want interesting and exciting – or maybe something they can identify with. Once you have one of those things you can start building your fanbase.

Why do you feel that rock is still such a strong format for expression?

Rock is such a wide spectrum of music – to me it is the rhythm that runs through my mind whenever I think of writing a new song – it’s the basis of so much modern music. It’s the solid, no nonsense beat that you can build a million songs from – it can be moody and soulful or heavy and agressive and can cover a multitude of emotions.

How can music fans keep tabs on The Anunnaki?

I am currently focusing on the Facebook page http://www.facebook.com/AnunnakiBand but also have a normal website at http://www.anunnakiband.co.uk . I am also using several other networks to get the Anunnaki project out there online and trying to tie them together in a useful way so no matter how potential fans arrive they get to see the whole project.