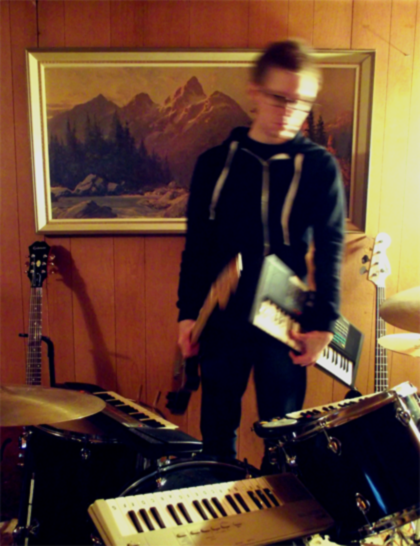 Today I had the chance for an exclusive interview with the intriguing electronic solo artist K. Preston Merkly, an Ontario native who creates emotionally charged synth pop/indie rock soundscapes under the moniker Ocean City Defender.

Welcome to Independent Music Promotions, Ocean City Defender. Can you talk about your new album “The Golden Hour” and the concepts behind it?

Thank you for having me.

The Golden Hour is my debut EP. Ocean City Defender as a band has been around in several different forms for years, never releasing anything on this scale, but I’ve since moved it being just me. Thanks to computers and looping, I can do everything I do on the record on stage alone. This is the first time I feel that I’ve really found what I’ve wanted to do as a musician and with the sounds I’ve had in my head for a long time.

Conceptually, The Golden Hour is primarily about isolation. I spend a lot of time alone in general. My job is fairly solitary; I am not a big partier; I record alone; and now I perform music alone. I don’t think it’s a terribly negative thing. The overarching theme and lyrics may seem dark but it is – in some way – a celebration of being alone.

The EP’s title ties in with the theme as well. Most days I wake up really early and walk my dog and then play music, and that’s a really contemplative time. Everything is still so quiet. Just as the sun is coming up, there is a haziness and calm to the air; everything is bathed in orange. Photographers call it the golden hour. Alternatively, in emergency medicine they refer to the brief window of time where medical attention will prevent death the golden hour. So both definitions create this great contrast of meanings, but both hold the idea and importance of urgency which is something I always hope to convey.

I started playing guitar when I was 8, and moved in to other instruments as I got older and discovered home recording. I wasn’t athletic when I was younger, so I had to do something while not playing video games. Guitar filled that void.

Growing up during the 80s/90s I feel that – for better or worse – my ear was tuned to the sounds of that era and still hold a really big place in my heart. A band like Tears for Fears is really important to me; they crossed this electronic / rock bridge that I feel informs a lot of what I do now. I have my father to thank for my love of Tears for Fears.

I got in to punk rock in grade school, and started playing in bands then and just haven’t stopped. My tastes evolved quickly from there to slower, subtler, and atmospheric music. Bands like Slowdive, Codeine, and Bedhead still really inform a lot of what I do, although it may not sound like it on the surface. I suppose I fall somewhere between New Order and Slowdive. I love waves of sound, warmth, vocal melodies, and strong rhythms.

With the internet, it’s almost impossible to keep anything down. Someone will find it. I put The Golden Hour EP up on Bandcamp and within 12 hours it was on music sharing sites and file sharing sites. As of right now, I believe it’s number 8 in terms of popularity in the ‘synth pop’ genre on Bandcamp. A few blogs have also found it and given it some promotion as well. All of this happened with me just hitting upload on the computer.

In terms of active promotion, I send out several emails, letters, and CDs a day to various blogs and magazines to get some exposure. It can be exhausting, but that’s part of the fun. I’m sure having a label or publicist would take a lot of that weight off, which would be nice.

Pretty much anyone willing to take a chance and do something different. Listening to mainstream pop radio physically makes me ill. I start sweating and I can’t concentrate. I believe it’s the production techniques used today. Everything gets hyper-compressed and tuned to “perfection” that it sounds unreal. Believe me, I am a perfectionist and appreciate music that has been cared for and produced well, but this mainstream pop is something else.

There are some really great bands, artists, and labels doing some incredible stuff now and doing it in a sustainable way. As far as bands go, I really love The Radio Dept., M83, Wild Nothing, DNTEL, and The Soft Moon. Labels like Captured Tracks and Ghostly International are incredible and seem to be run by individuals looking to create and keep an aesthetic about them that I really appreciate. Paper Bag in Canada here has some great bands and appear to be growing constantly with an incredible and diverse roster. The A Different Drum label/distro is doing some really cool things with subscription and short-run releases while also keeping some great synthpop alive.

I can understand that it is hard to feel that you as an artist can make a difference. I believe that’s what we as independent musicians want, and I’m not speaking out of turn here? My advice is to do exactly what you as an artist or band want to do and then push it as hard as possible. Someone will find it, and someone will like it. You can make a difference. In doing exactly what you want, regardless of what some people thing, you’ll be able to sleep better, play better, and write better music.

If I wake up and I see one tweet or note on a site that someone has shared a link to my record saying something like “incredible record, check it out”, that makes my day. I reached somebody, and my music did something for that individual.

How can music fans keep tabs on Ocean City Defender?

I intend to bring my music on tour to the music fans as soon as possible.