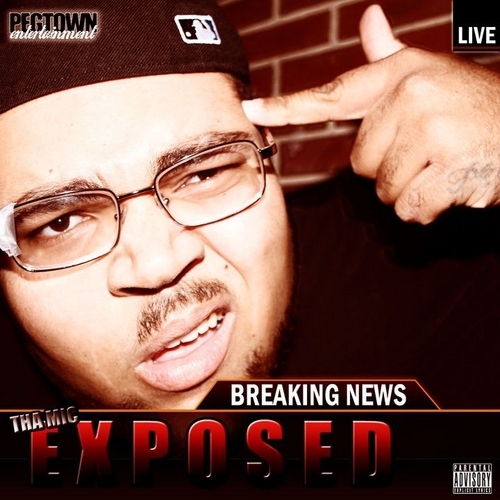 In this exclusive, Winnipeg rapper Tha Mic talks about the state of hip hop today and how to see past the smokescreen to get to the real goods. Welcome to Independent Music Promotions, Tha Mic. Please tell us about “Exposed” and how it came to be.

Glad to be here. “Exposed” is not your everyday “murder murder kill kill” or “got all the women, blow all my money trying look bad” hip hop album. It’s reality rap to the core with no fillers or bullshit, just straight thought provoking music. It was originally titled “The North American Dream” but I just felt that the songs were so real and touching the title “Exposed” did more justice for this body of work.

How is the Winnipeg hip hop scene?

The Winnipeg hip hop scene is a massive collection of artists from all walks of life, so there’s a little something for everyone in Winnipeg. When I first started making music there were only a few artists that actually caught your attention and made you believe they’re a serious act, and then I showed up, along with a few other cats and put our hoods in the spotlight. You see most people have a perception that if your not from L.A. or from New York or the states even, you don’t live in the hood. Winnipeg is the murder capital of Canada like 5 times running consecutively, that’s not for no reason. Is it something to be proud of? No of course not, but if you think you’re going sit around and speculate about it there’s your answer plain and simple. I’ve worked with Hussein Fatal from the Outlawz and he was blown away by the type of things I was saying on the record, he had no idea how live it was down here and never expected to hear real street thought provoking lyrics from a kid in Winnipeg.

How do you feel about hip hop in general these days? Is it thriving because of the resurgence of mixtapes and indie rappers?

Hip Hop really pissed me off last year, Hip Hop had such a horrible year in 2011 I stopped paying attention to it. As an artist it was great, I got to listen to other genres of music and really clear my mind of the stereotypes and lack of substance most mainstream music is chock full of. As a Hip Hop lover who takes his Hip Hop serious it was horrible, the real artists are disappearing, the skill has been replaced by the check book, the kids are getting taught lies by people who’ve never done any of the things they’re saying and those kids are paying the consequence trying be like they’re favourite artist.

Don’t get me wrong that aspect has always been present in Hip Hop, but not every song on the record. 2pac can talk about riding on his enemies, but at the end of the day he’d still come on the next record and speak his mind about the world and there should be changes. There was intellect, now anything intellectual is not mainstream or is shelved by labels like Lupe. Indie and mixtapes is where real hip hop lives, most of these industry rappers would get box’d if I seen them, that’s how disappointed I am.

Being an actual artist and not a wannabe is like being unplugged from the matrix, so my inspiration comes from the past and my contemplation of the future, never mind today. So you can catch me listening to some classic Papa Roach, Nickelback, Theory of a Deadman, got some Bob Marley, Billy Ocean,

Snoop, some old school rap-a-lot. As for today I’d have to say the artist who impressed me the most was Eminem with Recovery. That album is exactly what the game needs more of, aside from the relationship tunes the strength is there behind his lyrics, I don’t feel stupid listening to it.

What advice would you give to people who want to become recording artists?

The industry is fake, everything is fake. Don’t take any of the things you see on TV too serious, because it’s all business based. If you’re a business minded person however, the industry may be the perfect place for you, but with that IM assuming you don’t write your own music and are very detached from an artist’s head space. You can’t write a song just anywhere all the time, inspiration is key, so don’t rush your art. And you need lots of money, and people behind you making moves on your behalf. Like I was saying, either your an artist or your a business man. You’ll have to do your own business in the beginning, but you constantly have to be looking for someone else to wear the many hats, be a boss. If you’re in a group then you’re all bosses that all have money to work. If a person is talented, great, if that same person has no interest in pursuing and establishing your group then nip em in the bud and move on.

How can music fans keep tabs on Tha Mic?

I got over 20 music videos so check out the YouTube channels, hit me up on FB and Twitter IM usually on there.