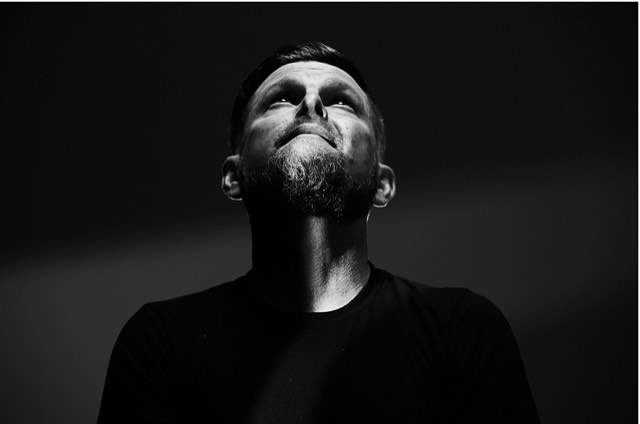 Director Dilly Gent (former Radiohead creative director – see IMDb for portfolio) filmed Tim Husmann of 1st Base Runner sitting high on a box inside a convertible while driving around Long Beach. His instructions were to remain statue still, despite cold conditions and the fact that he had just filmed his underwater music video, Man Overboard, earlier that day.  He most definitely became ill. He most definitely had the ride of his life. As such, Dilly Gent remains Creative Director of the 1st Base Runner project indefinitely. Along with Stephen James Moore of Independent Music Promotions and visionary art director Matt Needle, the small team continues to prove the antiquated music industry can be circumvented by artists who truly want to make art. 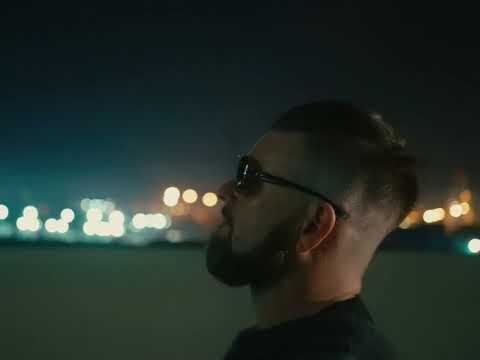 Our character remains stoic and unmoving in contrast to the alien city landscape of Long Beach, suspended as an observer of a destination only he can see. The eerie, pulsing electronic soundscape pulls him through a dark drive like a puppet on a string. Will he relent upon arrival? Ominous and other-worldly, 1st Base Runner looks unphased in the passenger seat as the sky changes around him and the city lights flicker to the pulsing music, as if foreshadowing a pending cataclysmic event. And yet, throughout the strange, dreamscape-like visual, there is an all-pervasive sense of peace and acceptance amidst the frenetic, almost alien surroundings.

Watch the music video for “Dark Drive Through the Canyon”.

Stream “Night Stalker” on Spotify.
About 1st Base Runner:

1st Base Runner is the immersive project from Texas multi-instrumentalist and producer Tim Husmann. The visionary artist draws on shoegaze, nostalgic 80’s dark wave, and an array of analog synthesizers to create powerful songs that carry the weight of raw emotion and hard-won wisdom.

In just two years, Husmann has released more EP’s and stunning music videos than most do in a decade. There is no doubt that the 1st Base Runner project will continue to turn heads in 2023 with a showcase at SXSW and two more upcoming releases. Smashing through walls on his own is something Husmann is quite adept at, becoming an almost tangible sensation to the listener. With the weight of two impressive musicians behind him, one can imagine that 1st Base Runner is the pale horse we have been waiting for.

Based in Los Angeles, Dilly continues to provide that quintessential link between bold musicians and dynamic visual artists with both classic icons and modern game-changers. She founded Son & Heir to serve a wide range of projects. The enterprise produces inspired and unconventional material for television programs, music videos, music documentaries, micro films and forward-thinking brands looking to create a striking visual identity. As a uniquely perceptive creative director, Dilly Gent has a knack for scouting and overseeing top-level creative talent. An indispensable guiding force thanks to her innate ability to visualize beyond the obvious and her holistic view on media outreach. A go-to name in the alternative/indie rock community and a fierce champion of the environment.

Dilly Gent came to London’s Parlophone Records in 1992 at the same time as a freshly-signed Radiohead. For 17 years she worked with the group as creative director facilitating a host of iconic music videos. She also served as producer on the band’s Grammy-nominated surreal Radiohead documentary film ‘Meeting People is Easy’ which captured the band during their zeitgeist moment, OK Computer.

Dilly’s love of capturing bands in authentic spaces led her to co-create ‘From the Basement’ television series with Radiohead producer Nigel Godrich. The host-less show took the era’s preeminent talents and showcased their raw essence from the comfort of the studio environment. The likes of The White Stripes, PJ Harvey, Beck, and Thundercat gave intimate performances in a setting that put a special focus on the execution of their craft.

Emboldened by a sense of guardianship inspired by her son Lok, Dilly has sought out projects which espouse environmental protection. She helmed the creation of 61 short films for Al Gore’s ‘Live Earth’ campaign. The project enlisted a host of directors from around the world to give their own unique spin on the many challenges facing our planet.