Gorillaz ‘Song Machine Season One: Strange Timez’ Full Album Is out, and We Had to Take a Minute to Gather Our Thoughts 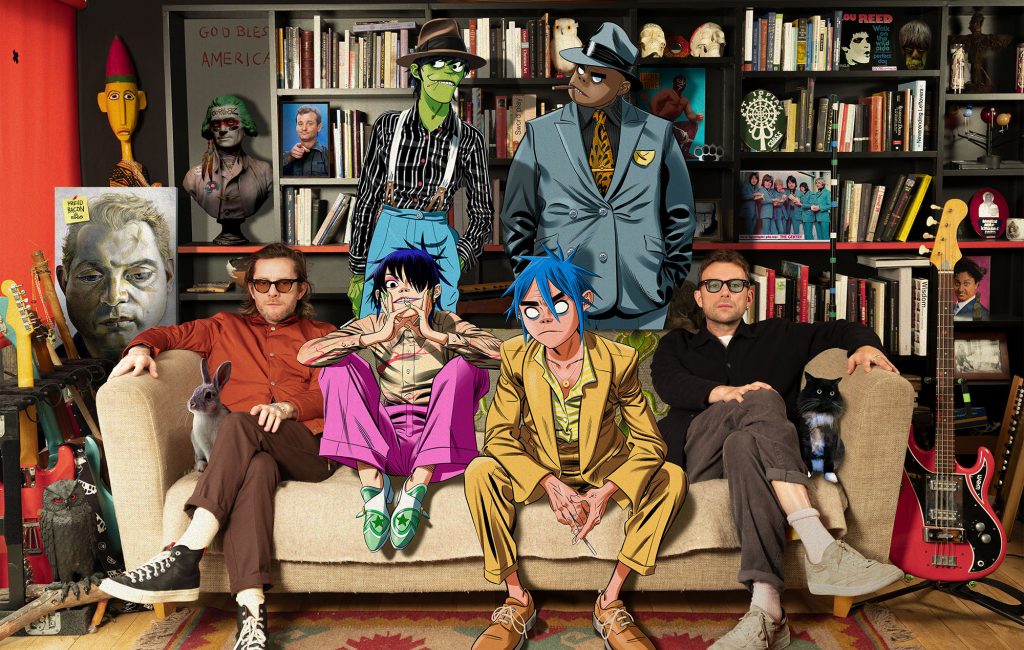 So much has happened with Gorillaz and their magical song machine since the release of the video for “Strange Times” and our wordy review of the Robert Smith collab. The beloved virtual band announced that Song Machine would be made into an album or rather a “season,” called Strange Timez. Before it released on October 23, the video for “Pink Phantom” featuring rapper 6lack and Elton John.

Before the album dropped, the heavily-anticipated, band member-curated “Song Machine Mixes” finally showed up on YouTube. When the album finally did drop, Gorillaz held a live “Song Machine With Friendz” Zoom listening party with Damon Albarn, Jamie Hewlett and many of the artists featured on the album such as Leee John, Kano and St. Vincent. Finally, shortly after the release, the next video for “The Valley of the Pagans” featuring Beck popped up in a GTA-style run through LA while Beck and 2-D alternate berating the city’s vapid populace.

Far from being caught up, Song Machine Episode One: Strange Timez has a full ten more tracks so in the interest of saving wordcount, we’re only going to cover “The Pink Phantom” and “The Valley of the Pagans” in tihs article. Rest assure, however, that as soon as the next video for “The Lost Chord” featuring R&B legend Leee John is up, we will be hear to over-analyze it. Until then…

We start, as one must when linear time is involved, with “The Pink Phantom,” the video that was released just a week or so after “Strange Timez” and the last video before the album/season dropped. Musically, “The Pink Phantom” was quite different than your average Gorillaz song, mostly because of the collaborators it involved. Elton John’s larger-than-life vocals and piano skills definitely added his flare and style to the track but didn’t take over. To wit: the main chords, beat and style of the track was centered around a  concept similar to Elton John’s 1973 classic “Benny and the Jets.” From there, it seemed Albarn and Sir Elton had a lot of fun with their battling pianos and avant-garde composition.

The heart of “The Pink Phantom” was in the vocals, which were also a source of confusion for many fans. Despite their meaning and interest (fading love, missed chances, the phantom of nostalgia, confusion over a lover’s changing behavior), comments from listeners felt the addition of Atlanta R&B and hip hop 6lack’s vocals were superfluous or didn’t quite fit. The more one listens to the track, however, the more all the different vocal styles and subjects start to gel together.

When really looking at the technical elements of “The Pink Phantom,” 6lack’s not “fitting in” is down to an engineering choice. The song truly would be missing something if he wasn’t there, and his distant, staticy, auto-tuned vocals are there to represent the emotional distance and confusion. It’s superfluous on purpose, as it’s really about someone reconciling where they are now in life and letting go of what doesn’t fit anymore.

The video brought even more layers to this deceptively complicated story. It posed a cartoonized Elton John in a dark room with 2-D, which was lit only by a Hand of Glory candle. We won’t go into the gory details of what a Hand of Glory is, but suffice it to say it’s a talisman that has the power to put people in a daze. This might also explain why 2-D’s eyes are closed throughout the video (another hot topic of conversation among fans) and also introduces the idea that the whole video is meant to be 2-D’s dream. Murdoc is seen creeping in and out of a dark room chasing a cartoon “pink phantom,” again lending credence to the idea that the video is a dream. Who other than Murdoc would want to catch and imprison 2-D’s happy dreams and fantasies? The fact that 2-D said he found the creepy primate Hand of Glory in Murdoc’s room among lots of other “scary things” in a mock interview with the band in Dazed Digital.

In the same interview and in the Zoom livestream, Albarn and Gorillaz co-creator and animator Jamie Hewlett spoke about how the video is also a reflection of the current times in a very real way. Due to travel restrictions, neither Elton John nor 6lack could actually film in person for the video. This led to Hewlett animating Elton John and the hologram idea for 6lack. In the Dazed “interview,” Russell said he went to Atlanta through the Kong portal (pictured at the end of the video) and shipped 6lack back to the studio. It seems, whether  the video is meant to be in 2-D’s dreams or not, we can all relate to wanting to have a portal to we can see loved ones and we’re all dreaming about getting back to normal. Toss in pink, 70s-style graphics that are a clear nod to the Pink Panther movies and Murdoc at the end in a Matador’s outfit, and you’ve got one incredible video.

The Valley of the Pagans

The last shot at the end of “The Pink Phantom” wasn’t actually of Murdoc and his attention-grabbing, form-fitting outfit and allusion to him being the Pink Phantom but of everyone’s favorite 1969 “Bitchin Camaro” from the “Stylo” video on the Plastic Beach album. Now fixed up and re-branded as “Pagan,” old Stylo roars to life as the video cuts off, and there was a collective howl among fans that was a mixture of joy to see the car and frustration at yet another ultra-teaser of a preview for the next video. Luckily, it lived up to the hype.

“The Valley of the Pagans” opens with the whole crew sat in Styl-Pagan (that’s going to take some getting used to) and Noodle in the driver’s seat. That’s already an exciting twist but this video also introduces fans to the “Kong Portal,” something that has been alluded to for years now and certainly explains how the Gorillaz are able to location-and-reality-hop almost constantly. Certainly Stylo is involved in these portals as well, as in that video, Murdoc jumped it into the ocean, where it turned into a mechanical shark boat.

Now, Stylo-cum-Pagan is teleported to a nearly empty Los Angeles for a joyride and a video call with Beck. Apparently despite being able to portal from West London to West Hollywood (point of fact: most of the action takes place in downtown LA), but the pandemic is still very much present. Beck is not with the band and the video obviously reflects the new world we live in, having Zoom or WhatsApp meetings and kind of being able to do whatever you want on the roads with no traffic in what is usually a busy metropolis.

The video would have been more or less cut and dry, (unusual for Gorillaz) with just a few nods to the Gorillaz storyline, but for the funny little controversy that struck up once it was posted on YouTube. Because of its similar appearance to recent versions of Grand Theft Auto (especially the end), many people thought the video was an ad for the new island expansion pack and Rockstar Games actually convinced the YT powers that be to remove it. Luckily, another YT account called Song Machine re-uploaded it the very next day, so we still have it. Watch below asap just in case it gets taken down again:

Aside from being a bop and a great melding of Gorillaz and Beck’s classic styles, the subject matter of the song itself is the obligatory trope about Damon Albarn’s love-hate relationship with LA and his bemusement at its health and wellness culture. He was likely ecstatic to find that Beck shared these views, although the aging post-modern rocker probably has more of an insider’s perspective, being a native.

The lyrics talk about the “woo” culture of LA and the idea that the beautiful weather and topography of Southern California has created a sort of need to be happy all the time and a lack of introspection. It turns into this strange form of vapid spirituality, ostensibly based around drinking smoothies, doing bastardized forms of yoga and getting lip fillers. It’s not much of a wonder that Brits like Albarn and his blank-eyed doppelganger 2-D stare slack-jawed at the city while slumped down in the back seat of a Camaro while Beck tries to explain.

The big reveal in “The Valley of the Pagans” was at the end, where the hints are normally given for the next Song Machine” episode,” and this hint was truly epic. As Noodle sets the car careening down some train tracks and jumps it into another portal, the car is spit out in….Plastic Beach! These two frames of footage garnered the following collective reaction from eight million Gorillaz fans:

It also, along with the actual preview of the next video for “The Lost Chord” featuring Leee John where Stylo/Pagan dives directly into the ocean in front of the Plastic Beach island, set most fans’ neuro connectors firing at top speed, asking a billion questions: wasn’t the last time they went to Plastic Beach also in Stylo (Pagan) from Southern California in the “Stylo” video (yes)? Was the plastic vibe of “Valley of the Pagans” supposed to be a hint (totally)? Didn’t I see The Pink Phantom hanging out of the trunk of the car while they were cruising (you did)? Wasn’t there a phantom throughout the Plastic Beach series and didn’t it first appear in “Stylo” (yes!)? Is the Pink Phantom also the toxic plastic Phantom (I don’t know but the Pink Phantom looks an awful lot like the Superfast Jellyfish!)? Is Bruce Willis coming back (dear God we hope so!)? Is everything about to make more sense than ever before in the Gorillaz world (probably not)??

We could go on, but in the interest of fairness to the reader, we’ll wait until next time as the saga continues. It’s already revving up with the preview for “The Lost Chord” which shows Stylo/Pagan going from portal to ocean, presumably to change into a mechanical shark submarine once again (cue fans messing themselves once again when that hits). In the meantime, we urge fans to take a good, heard listen to the rest of Song Machine Season One: Strange Times. While all over the board stylistically, the music and the lyrics of each song have that characteristically Gorillaz mix of beauty and the beast, ennui and hope, party and pestilence. It’s especially poignant this year for messages like these, if for nothing else to keep our hearts from shutting down in apathetic fear and to keep that critical thinking muscle flexed against mob mentality. Stay tuned.