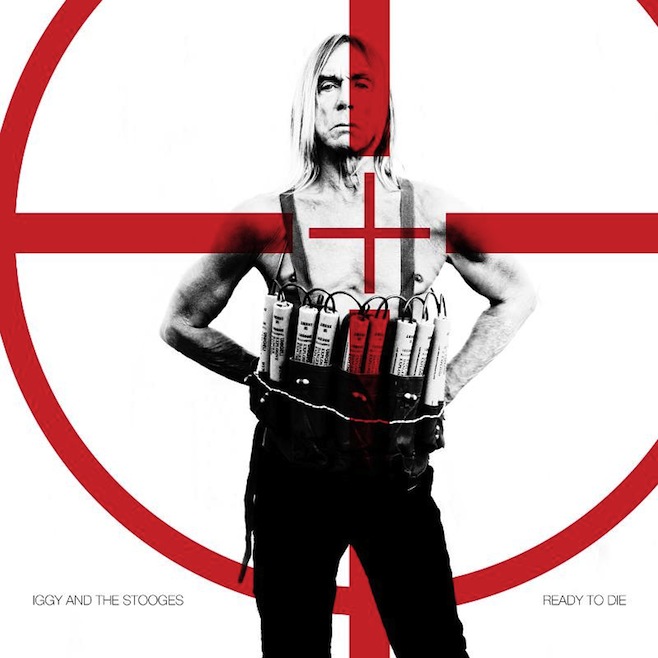 Iggy and the Stooges “Ready to Die” has to be one of the most anticipated rock releases of 2013, and the reuniting of Iggy Pop and guitarist James Williamson has been much talked about. The album is meant to be more of a snapshot for where the group is right now as opposed to any follow up to “Raw Power”, with all the weighted expectations that implies. All of The Stooges’ original albums are considered classics in their own right, while 2007’s “The Weirdness” received generally poor reviews. It makes sense that Iggy would want to say something new in the most potent form possible; with his brothers in arms. Lead single “Burn” showed a lot of promise for the album, providing more than it’s share of menace and danger, although the album doesn’t exactly follow suit.

It’s dissonant, pitchy, messy, and triumphant; everything you want from rock n’ roll. The guitars are front and center, blaring blissfully, while Iggy’s baritone is sobering, capturing the defiant energy of the best Stooges material. “Burn” is probably the closest to a classic that the band can muster in 2013, and it’s a rewarding track.

The “Funhouse” sound mixed with extra pop sensibility and blaring horns for good measure, “Sex and Money” is an enjoyable track, though it marks a lane change from the aggression of album opener “Burn”. Iggy Pop muses over the joys of sex and money without going too deep into the roots of desire.

Catchy punk rock that’s not out to prove a point. It would be hard not to get into the feel of this one. “I got a job but it don’t pay shit.”

The guitars are explosive and the groove is solid, with a classic punk croon from Iggy, although what seems to be missing is the element of wildness and unpredictability that is so prevalent in The Stooges’ catalogue. It’s still pointed and hard hitting enough. “Everybody’s talking loud. I can’t stand the fucking sound.”

Here’s an unexpected change in feel; “Unfriendly World” is a straight up country ballad, and it works. The low raspy vocal warns “Hang onto your girl because this is an unfriendly world”. With some of the strongest social commentary of the album backed up by a sleepy island groove, “Unfriendly World” is a smartly written track that could be appreciated by fans of Tom Waits and Bob Dylan.

The title track “Ready to Die” is possibly the strongest song on the album, containing both the most memorable guitar progressions as well as the most memorable chorus, where Iggy yells “I’m shooting for the sky because I’m ready to die, die, die!” The song drives all the way through and could even sit well on one of the original albums. The writing is classic Stooges. Lyrically, it embraces the end with a sense of celebration, taking the now on as a form of true rebellion.

Cue the lowering of the intensity and disappointment! “DD’s” finds Iggy Pop tapping into his sexual appetites, although not in the most primal or intriguing ways (“Penetration”, “I Wanna Be Your Dog”). He keeps things on the surface, both lyrically and through his crooning vocal delivery; “I’m on my knees for those double D’s. Why tell a lie? I am crucified.” I’m not sure if this would be a favorite track for too many fans. It’s skip-worthy. It’s very skip-worthy. While part of the whole appeal of punk rock, at times, is it’s shallowness and it’s brazen appetite for the immediate, this song sounds tired, without putting much of an effort in to capture any of the sexual energy and put it in a bottle.

Horns and aggressive guitars, with Iggy spitting his world philosophy, the song works, recalling some of the energy of classics like “1969”. Although it has trouble lifting off, it’s another solid dose of rock n’ roll.

A lazy rock track that works as a power ballad.

Another ballad, and a surprising way to close the album. It sounds more suitable for a Willie Nelson album than a Stooges release, and doesn’t sound like a suitable swan song/album closer. The track meanders along, although it does boast some potent lyrics.

Overall, “Ready To Die”, while a big improvement over 2007’s “The Weirdness”, is a mixed bag. Some tracks are strong, but miss the frenetic yelps and left-field manic vocal approach that Iggy Pop is so known for. It’s one of those albums that you’re happy was released, because it’s great having a legendary group like this back on the scene again. “Burn”, “Ready to Die”, “Job” and “Dirty Deal” rock harder than most groups in their 20’s, and these, along with the perceptive ballad “Unfriendly World”, are definitely reasons to check out the release. If you wanted intensity from “Ready To Die”, you’ll get some of what you came for. Bottom line: it’s a fun album that misses the mark about a third of the time. The forgettable tracks can be forgiven, because the reality we’re in is a much better one than if “Ready To Die” wasn’t released. Rock is better for it, and so is music. Welcome back, Iggy & The Stooges!