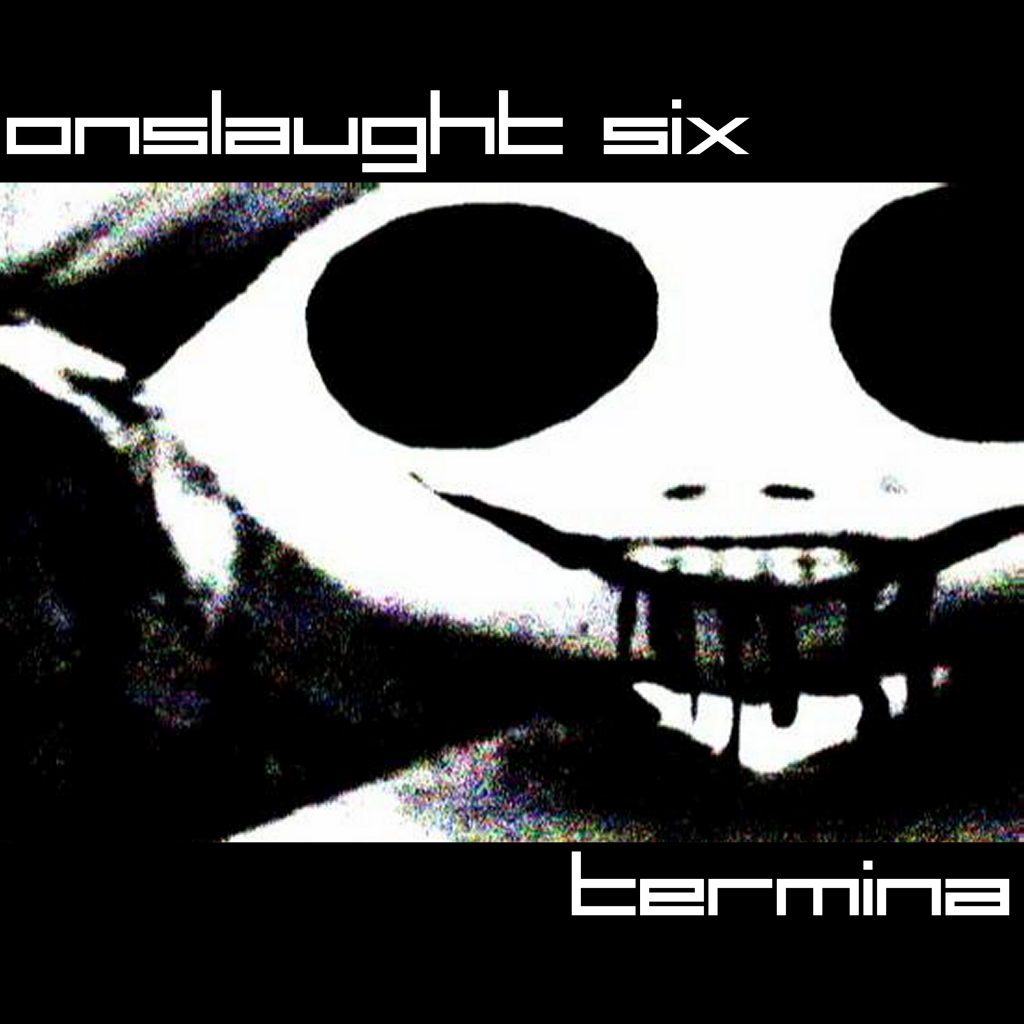 Today we have an exclusive with a talented solo artist who plays aggressive and emotionally charged industrial music. As an industrial fan myself, I commend Onslaught Six for being one of the few to continue bringing new inspiration to the art form. He is celebrating his new CD release “Termina” which is out today, so be sure to visit the Onslaught Six website to purchase.

Welcome to Independent Music Promotions. I hear a lot of classic industrial and Skinny Puppy influence in your material and that’s refreshing. Tell us about Onslaught Six and what you bring to the table.

Onslaught Six is me, a 20-something refugee industrial metal musician from the badlands of rural Pennsylvania. I write, record, perform, mix and produce all my own music by myself (with some occasional help from other musicians.) I’m tired of the industrial scene’s haphazard bullshit focus on feeling sorry for themselves and making crappy slow whiny “ambient” instrumental tunes or crappy, poorly-produced, overdriven, mindless “dubstep.”

I want to bring back the hard-hitting aggression seen in the old days. Somewhere along the line, we stopped being pissed off about everything, and that pisses me off. I want to bring industrial back to its roots, but more than that, I mostly just want to make music that I would like to listen to. John Romero, former developer at id Software (Wolfenstein 3D, Doom, Quake) once said that all they ever tried to do at id was make games that they wanted to play–because if they liked to play it, chances were good other people might, too. I take the same approach with my own music.

How did your new album “Termina” come about?

Termina was born out of a lot of different things. Originally, I was writing my last album, Lamda Ecks: Enter The Machine, as a concept album, complete with a storyline and narrative. As I was writing it, a few songs didn’t really fit, either narratively, stylistically or lyrically, so I set them aside in a little pile. The followup to Lamda Ecks was intended to be a classic metal album called Serious Songs For Serious Earth, but progress on that kind of stalled out, so I instead decided I would take those leftover songs, flesh them out, and release a half-hour EP that originally was named “Bleedthrough,” and later “The Blue EP.”

But in late 2010 a guy named Jadusable created a “creepypasta” (kind of like Internet ghost stories) story involving a dude who found a haunted The Legend of Zelda: Majora’s Mask cartridge that drove him insane. It eventually grew into something bigger, this whole “alternate reality game” with videos and what was planned to be an interactive game component that never got finished. But during those initial phases, I was so inspired by what he did–and by Majora’s Mask in general, which is a super-awesome and creepy game–to write the song Termina. After that, the EP became the Termina EP.

It was only after I’d recorded Termina and started recording some of the other songs for the EP that I went back to an old computer and unearthed a pile of old demos and lyrics–songs that I had written years before, but deemed too “difficult” to finish. I didn’t yet have the talent, skill or know-how to get them to sound how they did in my head. Thankfully, I decided that I did now, and suddenly Termina became a 12-track album that goes well over an hour.

Grassroots and making a connection. A lot of my “fanbase” are also my friends, but some of them weren’t friends before they were fans, and vice versa. In addition, I regularly go to indie music forums and popular band forums that have sections for original music, posting links and interacting there. I think if you’re an indie artist, it’s important to know your fans on a personal level. Ask them what they like! Which of your songs do they like? Maybe you should make more songs like that. I don’t mean in terms of “selling out,” and only making certain kinds of songs because they’re popular, but if people are more fond of my heavier songs, for example, maybe my next album will go more in that direction.

Everyone in Skinny Puppy and the various side projects, Trent Reznor, and Devin Townsend, particularly. I think Devin has one of the best work ethics in the business and I only wish I could power through things like he does–but then, he has 20+ years of experience on me, so that’s to be expected.

I’ll tell you who isn’t an inspiration, though–Ministry! I mean, Jourgensen seems like a cool guy, and I loved Rabies–it’s my favourite Skinny Puppy album–but for some reason Ministry and me just don’t get along. Which is hilarious, because usually when people listen to my music, especially my earlier stuff, the first reaction is, “Oh, hey, it’s like Ministry, cool,” and I’m just like, “Argh, no!” I mean, I understand the comparison, there definitely are some similarities…but it’s not really intended to be the same.

Keep trying. It’s a difficult world out there, and sometimes I’m not sure if this is the direction to be going either. But something that keeps me in check is to have realistic goals. Set deadlines for yourself, set milestones for your album. “In six months, I want to have five songs written, recorded, and roughly mixed.” And then go ahead and do that. Then worry about the next five. If you can meet or exceed that goal, great! And if you don’t meet that goal, then try harder next time–and hey, if you don’t record five songs in six months, maybe you recorded four. That’s still four songs. That’s an EP, man!

How can music fans keep tabs on Onslaught Six?

There’s lots of ways to contact me. In the coming months, I’ll be launching a new website at OnslaughtSix.com, which will serve as a hub for all the things I’m involved in. But for now, the best thing to do is follow me on Twitter (@OnslaughtSix) or Tumblr (http://onslaughtsix.tumblr.com) as well as my band Facebook page (http://facebook.com/pages/Onslaught-Six). All of my music is available, most of it for free, at http://onslaughtsix.bandcamp.com.