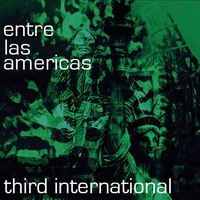 I’ve always liked bands and artists that released concept albums. Bands like Queensryche, Rush, Genesis. Pink Floyd come to mind. Many of these albums move through your mind very much like a major motion picture would. Leading you by the hand and providing the listener with much in the way of musical drama and theatrics. At the end of the day I feel it only adds to the overall entertainment value. Third International is one modern band that is doing just that with their latest release entitled “Entre Las Americas”

“Entre Las Americas” which means “Between 2 Americas” and as you would expect this latest release goes into finite detail about the struggles between both worlds set to a musical theme. The look and sound of TI has a classic Progressive sound to it – very much like Primus, Pick Floyd, Radiohead combo. But just when you think you got TI pegged they throw in elements of Techno-Ambient rock which gives the CD a very theatrical feel. Pearson has the voice, look and songwriting prowess to be extremely dangerous and are clearly a force to be reckoned with. They have songs and lyrics that challenge your mind and spirit. They cut right to the chase and make the critical connection with the listener and there is a unique quality to this catalogue that breaks the mold from the mundane melodic rock that’s been filling the airwaves lately. Indeed TI has the tenacity to release a concept album in 2012. I’m here to tell you there are so many fans out there who are yearning for this kind of release right now. Musicianship across the board is rock solid. Band line-up includes Andrew Pearson (Guitars, Guitar Synthesizer, Vocals, Electronic Percussion, Sampling, Bill Foster (Bass), Adrian Harpham (Drums), and Dave Eggar (Cello). For those of you not familiar with Bill Foster, he has played with the likes of Govt. Mule, Black Crowes, Rufus Wainright, and Billy Cobham – need I say more.

My top tracks: “Toys” and “Baba” Equally as impressive is how marketable this band truly is to a dedicated elite group of followers.

In close “Smalltime” is extremely likeable and commercially viable act with a fresh sound and dare I say hellish aftertaste that packs a powerful punch. It also takes us back to our musical roots with a more traditional hard-rock foundation – I like the call. But the most important element to Smalltime is the “Been the re made that mistake” attitude I get from them. They have my full attention deservedly so. It will also genuinely lift your spirits unlike most music you hear on the radio these days.

Final Word “Entre Las Americas” by Third International is a powerful statement that holds nothing back. TI deserve respect and your full attention.