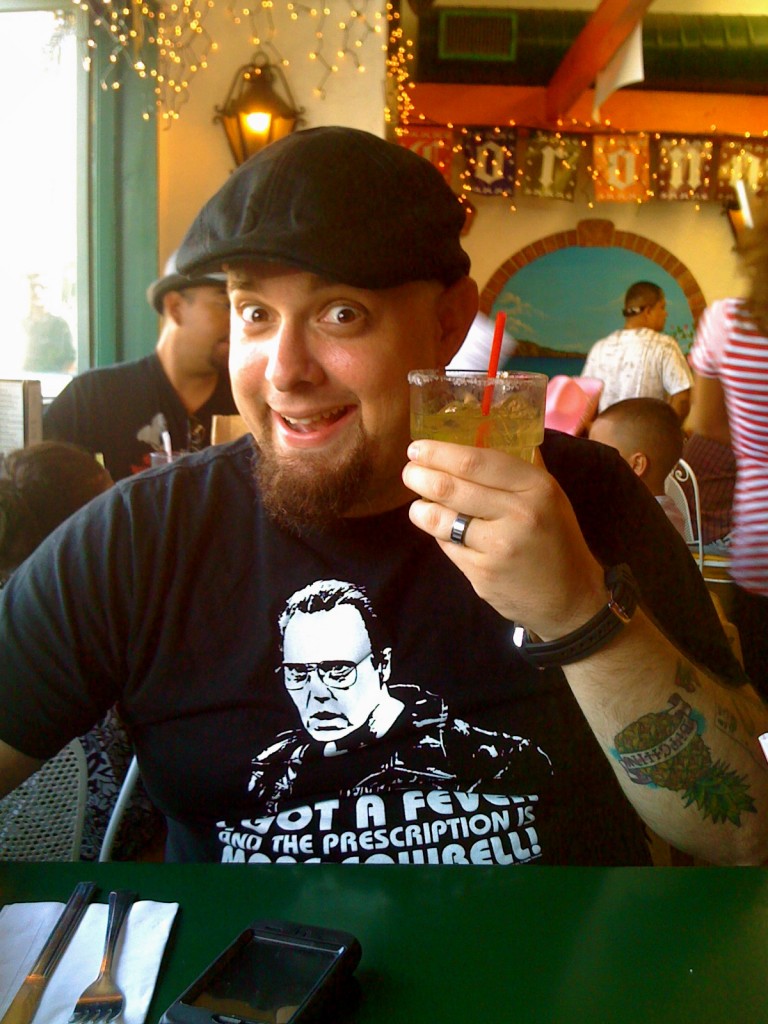 When I found out that Jeff Higgins, music blogger extraordinaire over at Groove Sandwich, was also a musician and had recently released an electronic music album called “Profit Prophet” (no, it’s not a concept album about Ted Haggard), I had to check it out. Ambient, dark and experimental, this is music you could listen to while floating through space (if you ever find yourself in that situation, I hope you’re comfortable). While some may find Jeff’s sound choices unsettling or overly challenging, I found them to be mind-expanding, and somewhat similar to binaural beat brain entrainment technology, which is actually designed to BE mind-expanding.

The sparse piano on “Movement One” reminded me of the forbidding moods on David Bowie’s amazing release “Outside”. By the time I got the the 3rd movement, I was already imagining a live performance and some psychedelic visuals to the material. “On the Run” by Pink Floyd came to mind when listening to the chaotic but colourful piece. “Movement Four” delivers broken up communications and unique use of  samples much like the well-reviewed buzz act Oneohtrix Point Never. “Movement Six” is reminiscent of Trent Reznor’s soundtrack work, with it’s more linear beat and consistency. “Movement Seven” closes the release with some ominous bells (aren’t bells ALWAYS ominous?), and a general atmosphere of warning. A calm wake-up call, perhaps. The chord choices at the end are sublime, and give the release’s closing a strange calm. This is a good release for any fans of ambient or experimental electronic music.

Welcome to Independent Music Promotions, Jeff. So what inspired you to create your new album “Profit Prophet”?

Well, I had taken about six months off from writing music because I found myself in a bit of a rut. During that time, I was working on my blog pretty heavily and I started to learn about the beginnings of electronic music. I admittedly became obsessed with studying all of the composers during that time like Pierre Schaeffer and Milton Babbitt. After working on what would later become the first movement of “Profit Prophet”, I discovered that this music made me happier than anything I’d worked on before because I was able to so freely explore everything. So I just kept working on expressing my ideas using that same spirit of discovery that those early electronic practitioners used.

What appeals to you about ambient electronic music as far as it being a vehicle for self-expression?

I think it’s the absolute freedom I have in the sounds that I choose to use. I feel that when it comes to a lot of other genres, people have a rigid idea of what that music should sound like. When something exists outside of that framework, some people get turned off. Ambient music is quite different in that the cultural definition we have for the genre is much more vague. If people have fewer preconceived notions coming into the listening experience, then they’re probably going to be more focused on discovering what the music is versus what the music isn’t.

Now that you’ve released this album, are you take the project live or record more material/create videos?

I’d honestly love to perform this material. The experience of connecting with people over something that you’ve created is an incredible feeling. Unfortunately, there just isn’t much of a market for this kind of music in my area. If there comes a time when it’s more feasible to do that though, I’ll jump on it. As far as recording goes, I am hard at work on my next album. I have four tracks completed towards a full-length album. It’s going to be more in the direction that you heard in Movement Five and Six on “Profit Prophet”. In regards to music videos though, I’d LOVE to have somebody visually interpret my music. So if there are any ambitious directors out there, let’s talk!

Wow. There are a lot of people out there that I think are doing great things. In addition to the composers that I already mentioned, I’m pretty wild about Tortoise. You can listen to any album from them and it’s sheer perfection. I really like Olivier Messiaen, especially his later works. He made use of such rich tone colors. Mogwai has had a big impact on me as well. Their music has such beautiful pacing. It’s never in a rush to get anywhere.

What are your views on the current state of both music as well as the business of music?

The state of music is strongly tied to the state of the internet. Currently, the internet is more or less a free place for the exchange of ideas and the music reflects that in the huge number of musicians out there that are making a name for themselves. There are a lot of opportunities out there for not just musicians but also the people that support them to live their dreams. With the threat of bills like SOPA, ACTA and PIPA knocking on the door, I’m very concerned that this will have a detrimental effect on the art form. The common language of music will be stifled in the name of protecting intellectual property but we all know that it’s being done by the recording industry that’s currently on the ropes. We’ve created a model for writing, producing, promoting and selling music that doesn’t include them. We don’t need them anymore. When any other industry fails because of a change in technology, the world’s governments don’t swoop in to save it. So why should we save the recording industry? Who tried to get legislation passed to ban computers when the typewriter industry saw a decline? Nobody, because it had become obsolete. End of story.

How can music fans keep tabs on Jeff Higgins?

The best way to stay up to date would be to check out my blog (www.groovesandwich.com) or follow me on Twitter (Twitter.com/gr00vesandwich). “Profit Prophet” can be streamed for free on my Bandcamp page or downloaded for the low low price of $5. I hope you enjoy it.