Ladies and Gentlemen, this is Chris Heist, baby… 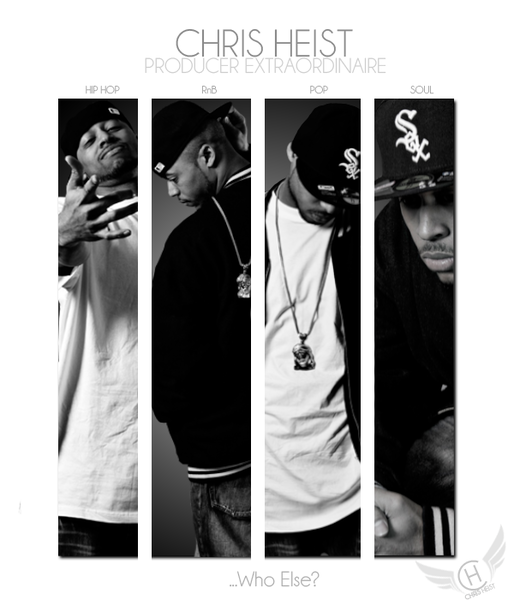 “Ladies and Gentlemen, this is Chris Heist, baby…”

Coming to us from Chicago is well-respected producer Chris Heist, whose work ranges from the epic to the grimy, covering just about every mood and intent in between, with beats aimed at the hip hop, r & b and pop genres primarily. Known for his anthems as well as his club-ready beats, he has quite the track record, and a ton of tracks available for streaming on his Soundcloud page, including “Until The End”, which sounds like the perfect backdrop for a prayer uttered in outer space, only grounded by it’s piano samples and strangely placed angelic chants. 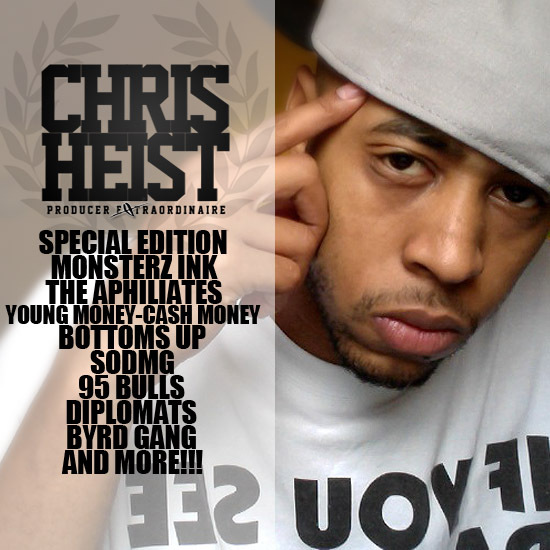 “Passing Time” has a solid hook, and it sounds like he’s mixing trance and hip hop elements here similar to the very popular AraabMuzik (also check out Chris Heist’s “Deny That” if you like Araabmuzik), who is set to play just about every music festival in the world this Summer. Chris’s production process seems highly intuitive. The pieces grow and evolve rather than leaning on expected hooks and predictable dynamic shifts.

A personal favourite of mine was “Music Box 2”, a brilliant West Coast beat that brought to mind “Ambitionz Az A Ridaz” by 2Pac. The sparse, minimalist hook gives the track a dark overtone it would be great to hear someone like Mos Def over. Truly a master of his craft – this is impressive stuff.

Welcome to Independent Music Promotions, Chris. I was really impressed with your production – a lot of your beats made me wish I could rap! How did you get started on this path and get to where you are today?

I started out rapping when I was younger in California after moving from Indiana, listening to Warren G (Regulators), Snoop Dogg (Gin and Juice) and Kriss Kross Feat, Da Brat (Da Bomb) and from there I kept writing until I moved to Michigan and as I got older I started lingering into more of the production side of things. I made a beat called Latin Love and it ended up being turned into a song/video called “She’s Hot”… I think that’s what it’s called, by Elington ft. Warren G and from there I was the beginning of me becoming a producer and ending the life of a rapper.

Please tell us about any notable projects you have cooking at the moment.

I have a instrumental mixture dropping soon called BangOut Season which I’m going through the mixing process of things making sure everything’s sounding 110%. I’m also working along side with James Cagne on Get Gwop’s mixtape called Get Gwop Season Part 2 Crystal Head and Kush and i’m working on a mixture with an artist in Houston named Natra who’s project will be dropping soon called When In Rome.

I feel like real music is starting to come back into the lime light. And, i’m not just talking about the artists either, i’m speaking from a producers stand point as well. The ground work for new music is being laid down we just have to keep at it and change things up.

It’s gotta be Nipsey Hussle. I seen how it was when he first started, that I can recall from his single They Roll featuring Game, and his Bullets Ain’t Got No Names mixtape series to his most current projects like #TMC (The Marathon Continues) and just random singles that he releases here and there and I just respect his dedication and grind and his music speaks for itself. Not too many artist(s) can speak about the street life and also keep that positive music around as well.

You have quite a variety of styles that you cater to. Is there a particular style that is closest to your heart?

Not really, I just love music. I love the challenge to create something new and something that I haven’t made yet or much of. I guess if I were to choose a certain one style it would have to be live instrument / orchestrated / classical tracks. I think that whomever the artist(s) is that gets on those records can express themselves more and really get into what they’re saying making the track that much better. I always look at it like if I were an artist I would want the music I make to represent me as a person and who I am as well as something like a soundtrack about me also, to the point to where the listener can picture his or herself in my shoes. Music is emotional and I try to show that in every track I put out.

How can artists or record labels arrange working with you on a project?

They can reach me on Twitter @iamheist and or my Gmail at iamheist@gmail.com

Below you can check out a track Chris Heist did for Jim Jones called “What’s your BBM”. With a militant beat and a rat-tat-tat verse, it’;s the perfect backdrop for Jim Jones’s aggressive flow and the anthem of a chorus. It’s been gaining attention on Youtube with well over 16,000 views thus far. Enjoy.

For more information on Chris Heist visit his Soundcloud page, his Reverbnation, or Soundclick. To request Chris’s services you can contact him at iamheist@gmail.com. Just be sure to have your rhymes ready!