Independent “dream pop” duo The Loose Hinges are quietly building their “cred”, with a self-titled debut that I would stake my reputation on saying it has some very profound material. Moody and mysterious, fans of Mazzy Star,  Morcheeba, and Cowboy Junkies will enjoy them.

Welcome to Independent Music Promotions, guys. I really enjoyed your new release and the atmospheres you’re creating. Is it a challenge as a duo to create such a thick sound?

Eliot: Thank you for the opportunity to reach a wider and more eclectic audience through your forum.

At times, yes, it is challenge to produce heavily layered music that doesn’t become too overwrought or self-distracting. We try not to get trapped into creating musical parts for their own sake because there is definitely a point of diminishing or negative returns, such as when you’re in overdub mode and just pushing the red button over and over again. So we try to be mindful of what the song calls for and do that and no more.

On the grandiose side, the song ‘Back In Tune’ evokes natural imagery on a large scale (ie the moon, the sun, the ocean), so I tried to make the music match the scope of the lyrical content by making the guitars sound like a big engulfing wave that ebbs and flows…like being pulled out to sea.

On the other hand, the last song on the record, a short folk/blues number called ‘Oh Boy’, is a live take with guitar, dobro and Kris’s voice…just about as spare as you can get. But, in my opinion, to add another instrument or part to that song would only weaken it.

Your music is very chilled out, but the mood is heavy and intense. What is it about dream pop that makes it a great forum for deep emotion?

Eliot: Dreams are fragile and ephemeral and always seem to convey a meaning above (or perhaps below) the literal. I love waking up after a dream and then closing my eyes and trying to get back into the dream It’s like seeing something out of the corner of your eye that you instantly recognize, but as soon as you turn to look, it’s gone. I think dream pop is an apt description for much of our music. We try to surround the listener in a moment that may deliver unexpected turns and twists that seem that hem a purpose without beating one over the head with it.

Kris: For me, dream pop is the perfect soundtrack for big, deep love and gut-wrenching heartache. Eliot’s guitars create intense, lush waves for all that emotion to naturally ebb and flow. Finding the right words to sharpen the image or feeling of the music sometimes felt like painting…. adding just a little color to intensify the overall sound and feeling. 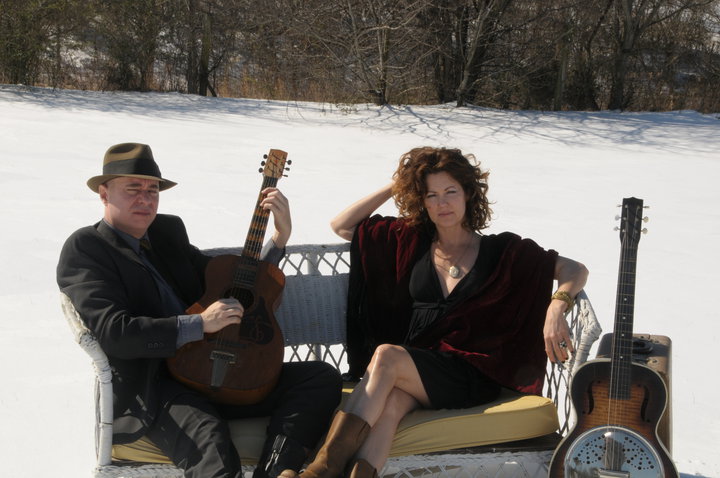 Listening to electronic/trip hop inspired tracks like “Out of the Sun”, I imagine you two playing the club scene in Europe. How has the music scene in Nashville treated you thus far?

Eliot: Nashville, just like any other town, is what you make of it. I have been fortunate enough to play, write and record with some of the most talented people in the world. However, most of what I’ve done in Nashville has not been in the vein of what we’re doing with The Loose Hinges. To a degree, Kris and I are trying to keep The Hinges under wraps in our adopted hometown until the right time. We’re really developing and extending our sound right now and don’t want too much Nashville inference or interference in the process. We think after this next record we’ll be ready to unleash the fury, ha, ha.

But sure, the Euro club scene would be just fine with me. Sign us up!

Eliot: The way I think about my musical education is in periods. Of course I had my teenage hard rock binge (Kiss, AC/DC, Van Halen, Cheap Trick, Rush) that morphed into more of a blues appreciation (Stevie Ray Vaughn, Santana, John Lee Hooker) that then matured into a huge jazz obsession (Miles Davis, Oscar Peterson, Ahmad Jamal,Pat Metheny) . Then I entered a less defined era listening to a bunch of different stuff like The Beatles, The Stones, The Sex Pistols, The Replacements, NRBQ (thank you and RIP Tommy), U2, Tom Petty, and The Clash. During this whole time, I was learning guitar (which thankfully, is a never-ending process) and getting an education on how songs are constructed, so I would spend hours in my bedroom playing along with the radio…to just whatever came on. At least during high school, alot of my woodshedding was really just avoiding my parents whom I was mad at most of the time back then. I was a typical teen.

Kris: My earliest musical inspiration was Karen Carpenter. I knew every word to every song on that brown album at age 5… still love it. I’ve always been a lyrics kinda of person and would sing really loudly in the car with friends, but when it came to being in a band and playing music – I never tried. I was (and am still) very shy when it comes to playing music. I never was proficient on any one instrument until now. But I love it and I’m glad I finally discovered it. When the playing and the singing come together, it feels like surfing to me.

Eliot: The bands that have really stuck with me and who I most admire are Cheap Trick, Wilco, Radiohead, Jet, Dead Weather, The Shins, Elvis Costello, Nick Lowe and some others I can’t think of right now.

Kris: Radiohead – love the way Thom York can sing a million different melodies over the same chord progression. White Stripes – the best guitar riffs. Patty Griffin – can be brutally honest and can sing her face off. Grace Potter – is amazing live. The Shins – their sound is so uniquely them and they always provide a ‘kite’ reference or two.

Kris: I could care less about it one way or another.

Eliot: Wow, these are some hard questions.

I think, it’s a mixed blessing, because you had years of record companies screwing artists with swindle contracts while simultaneously screwing the music buying public with exorbitant prices for music. Look at record companies now. They’re all folding (or merging) leaving a big vacuum in their wake for independent artists to come in and make their own destinies. At the same time, this technological wave which toppled the big record companies is also hurting the more successful of the independent artists through piracy and lost royalties. So what are you gonna do, turn back time to when there was no way for people to share music en masse like they can now. I wouldn’t. I want to learn how to master the medium and its distribution regardless of piracy, because the business has become more egalitarian and in my opinion art is more about giving than receiving anyway.

Eliot: I don’t think you should put too much stock in what other people think or say about your art because that’s just a never-ending rabbit hole. Ultimately, a true artist will do what he or she does regardless of the externalities and the public may or may not come around to value your art in your lifetime or after. But how can you worry about that? You just keep doing what you do and get better at it because it gives you joy.

“This Time” was another favourite of mine. It feels like it’s carrying you on a cloud when you listen to it. What was the inspiration for the song?

Kris: A good friend was stuck on a broken relationship. The chorus was literally an afimation for her to get over it and on with it. Easier said than done, no? For what it’s worth .. it worked. Watch out for that positive thinking, by the way — thoughts are powerful things.

I think The Loose Hinges would translate very well with music video imagery. Are there any plans to shoot one?

Eliot: Yes. We have made some tentative plans to shoot a video this spring. We’ll have to see if we can make it happen.

Kris: Yes — care to get involved?

What else is in the plans for The Loose Hinges in 2012?

Eliot: We are finishing another record and hope to release it by the end of May. After that we want to start playing more live shows to support these two releases.

Kris: You’ve got me all worked up now about hopefully touring Europe…. put me down for that in the very near future.