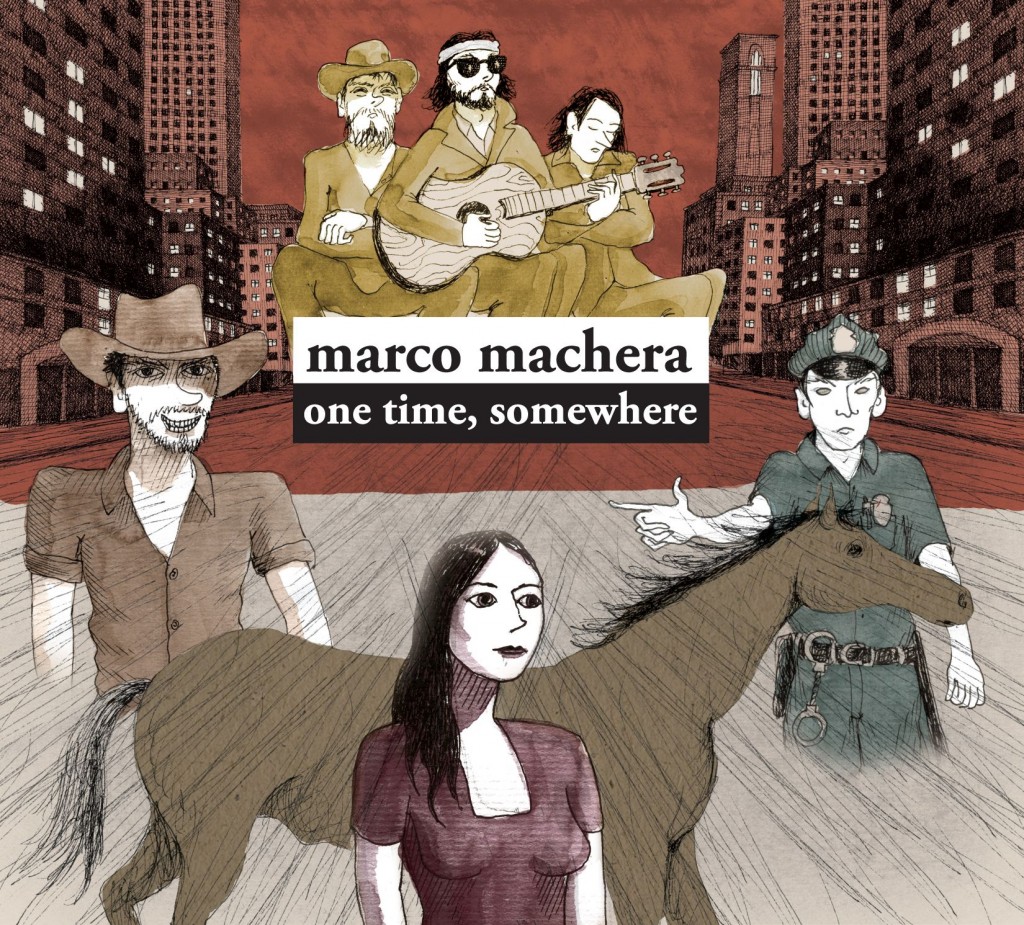 Marco Machera is not your average composer/song-writer. His approach sits somewhere within progressive pop music, rock and pure experimental. His new album “One Time, Somewhere” starts off with the symphonic/electronic ambient piece “Hello”, which sounds and feels like an elevating healing experience high up in the clouds before you’re transported to the big city, and the strange, spoken-word funk of “Stories Left Untold” arrives. Sludgy bass and abrasive guitars lead into an atmospheric chorus and the ominous vocal “Stories left untold….Moments never shared”. “Days of Summertime” has a strong Beatles influence, with familiar, classic chord changes that stretch beyond themselves, escaping and becoming more dissonant as the song develops. The build up just past the 2 minute mark is wonderfully disorienting. Machera has a gift for bring an intentional focus to chaos.

“Bright Lights Big City” is futuristic and tense, with a rockabilly-inspired driving bassline that turns into explosive cyber-punk/industrial for the fuzzed up chorus. “El Muerto” sounds like a song of both reverance and mourning, celebration and sadness – a classic Western and an epic affair. “Down Below” possibly showcases Machera’s strongest, most emotionally charged vocals that resonate with the same kind of emotion as Roger Waters’ work on Pink Floyd’s “The Final Cut”. “Down below the world is turned upside down” he repeats softly as the track fades away.

The album closes with 3 instrumental tracks that are all over the map style-wise. “Gotzendammerung” is King Crimson meets 80’s dance music, albeit with a modern ambient flair. “Hire Her” has a mood of stillness, beautiful keys with tape hiss in the background for subtle tension. The closer, “Troubled Childhood” features a calming glockenspiel that is interrupted by menacing drums and static noise. Machera’s love for controlled chaos shows up once again, and the album has a suitably unsettling finale.

All in all, this is a very inspired, creative debut release from a very progressive artist I look forward to a large catalogue of releases from. 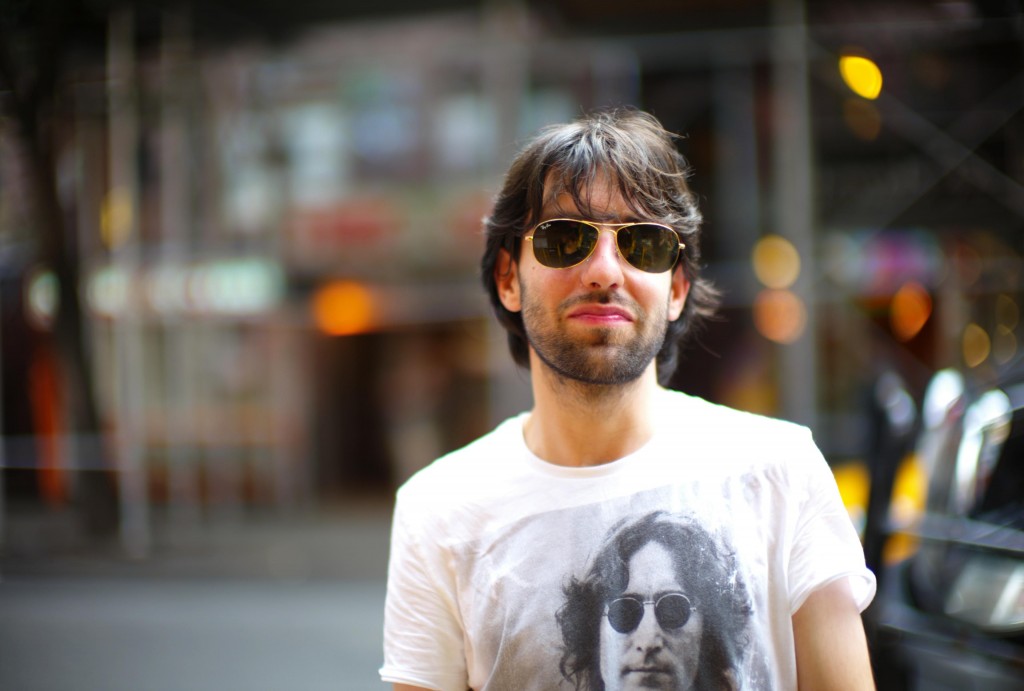 Welcome to Independent Music Promotions, Marco. Your new album “One Time, Somewhere” is all over the map style-wise. What, in your eyes, is the unifying thread?

On a conceptual note, I would say the urban landscape. The city is the backdrop for all the songs, though each of them tells a different story. Musically speaking, I don’t think there’s a common thread for the songs. I just wanted to write the soundtrack for specific sets of lyrics or certain imageries I had in mind. Each tune on the album is like a short story with its own personality.

What inspired you to set out on your own for this release? After all your previous musical experience, there must have been a lot of song-writing inspiration welling up.

You’re right. I started working on “One Time, Somewhere” in 2009 but I’ve been writing songs on my own for a very long time. I had lots of material to choose from, but I kept what I thought were the best songs I had written until then. That was a tough process. I can be very hard on myself, so it took me about two years to feel completely satisfied with the material. I felt this particular set of songs was very intimate, very much connected to my persona and my vision of music. That’s the main reason why I set out on my own for this record.

How is the music scene in Italy?

It’s not healthy. I feel many Italian musicians are too concerned about themselves and view music as a competition. Plus, I think there’s too much categorization – it’s not about making good music anymore, it’s about being cool and pretty much nothing else. Beside this, music is not seen as a noble pursuit, it’s quite hard to make a living with it. Some people can’t seem to understand how music can be a real profession.

Tell us about the biggest influences and inspirations that inspired you to start playing music.

I started an interest in music because of my older brothers. They play guitar and drums – I so wanted to be in their band that I picked up the bass at age twelve. They greatly helped me to shape my musical consciousness. I have a real passion for music, I listen to many different things and I like going to stores to buy CDs. I read the liner notes, I like to check out the lyrics, I like to know more about the artist I’m listening to. I still have a lot to learn and to discover. I went through my Heavy Metal phase when I was a teenager, then slowly shifted to Progressive Rock, developed an interest in Jazz, Rock n’ Roll, minimalism and so on. I’m open to anything, I’m driven by curiosity. My listening experience is strictly connected with the music I write. I write the music I would like to hear. At first, I was interested in being a good musician, an after-sought bass player. Right now, I’m way more into songwriting.

Hard to tell. There’s not much I like, lately. I’d say the Elbow band, they are growing on me – compelling music, for sure. They do their thing without being too much in the spotlight, which is something I appreciate. I listen to their songs from start to finish, good sign right? There’s also another artist I admire, Malcolm Moore. Like me, he has a new album out on Innsbruck Records and that’s just great. Also Sweet Billy Pilgrim and Thomas Feiner. I think Lorenzo Feliciati makes remarkable music, and Fabio Trentini from the Moonbound project too. Other than that, I hear many new things on the internet everyday, there are talented musicians everywhere, but just a few really impress me. We’re exposed to such a huge amount of new music that it’s quite overwhelming to keep up to date – at least for me.

I would not be happy about someone downloading my music illegally. I know I’m not going to be rich with this album, though if you really wish to support me this is the right time to do so. This is what emerging artists need right now. I’m not a fan of the “what matters is spreading the word” theory. It’s not about the money, it’s about being respected for what you do. Internet opened up many possibilities. You can actually hear samples, stream full albums, you can form an opinion and decide what is worth buying and what’s not. If I like something, I’m going to purchase it and support the artist. Music is fun and makes you feel good – but requires lot of effort and hard work too. Anyone who has a job and works hard (usually) gets paid at the end of the month. Why music shouldn’t be like that? It drives me crazy. As far as the music industry is concerned, it has never dealt positively with the artists, so I guess it’s paying the price now.

What are your thoughts on the state of music today?

I’m quite hopeless about it, really. I’m not too fond of where mainstream music is going nowadays, I think there’s a general lack of musicianship and creativity. However, there are good acts no one knows about – including me, I guess. Thankfully, you can turn MTV off, throw away all kinds of useless, discriminatory musical magazines and walk a different path. The problem is: the wrong people get the most exposure.

What else is in the works for Marco Machera in 2012?

Lots of promotion. I will tell people why they should buy my album. Maybe some live performances too. I’m working on live arrangements for “One Time, Somewhere” right now. I don’t plan making another solo record soon, but who knows. Some other projects are in the works as well, so I will definitely find a way to keep myself busy.

I enjoyed your use of dissonance throughout “One Time, Somewhere”. It made the melodic aspects warmer and the whole album more exciting and unpredictable. What about controlled chaos excites you as a writer?

As you say, I like the unpredictable aspect of it. I’m not interested in making things too polished. I’m in a position where I’m free to be experimental and take the songs to another level. My aim for “One Time, Somewhere” was to write pop tunes with an experimental edge – this is what excites me the most. Sort of being in the middle, so you can be interesting without making the listener fall asleep or run away in shock. That’s a challenge. Some people told me “It’s not an easy album”, which is true after all.

“Stories Left Untold” is quite cryptic. What inspired this track?

The song tells about my first trip to New York City. I fell in love with that place and I thought to write a song about it. I was very much into Jack Kerouac and the Beat Generation at the time, so I tried to emulate that particular writing style when composing the lyrics. “Stories Left Untold” is a song about being far from home and getting carried away with events, lost in a foreign place, missing someone you wished was there with you.

I found many of the tracks to be powerful but “Bright Lights Big City” surprised me with it’s industrial, almost cyber-punk sound, and “El Muerto” was instantly epic, though entirely different. Can you talk about how these two line up theme-wise?

They do not line up theme wise. That’s just how things evolved, it wasn’t intentional. I guess during the long time span that I worked on “One Time, Somewhere” I had gone through so many musical and lyrical influences that they spontaneously showed up in the material.

Is “One Time, Somewhere” a concept album?

No, it is not. I see it like a collection of short stories, or short movies if you prefer. As a matter of fact, some of the working titles for the record were “Short Stories” or “Nickelodeon” (an early 20th-century form of small neighbourhood movie theatre), but then I thought those names sounded kind of overused.