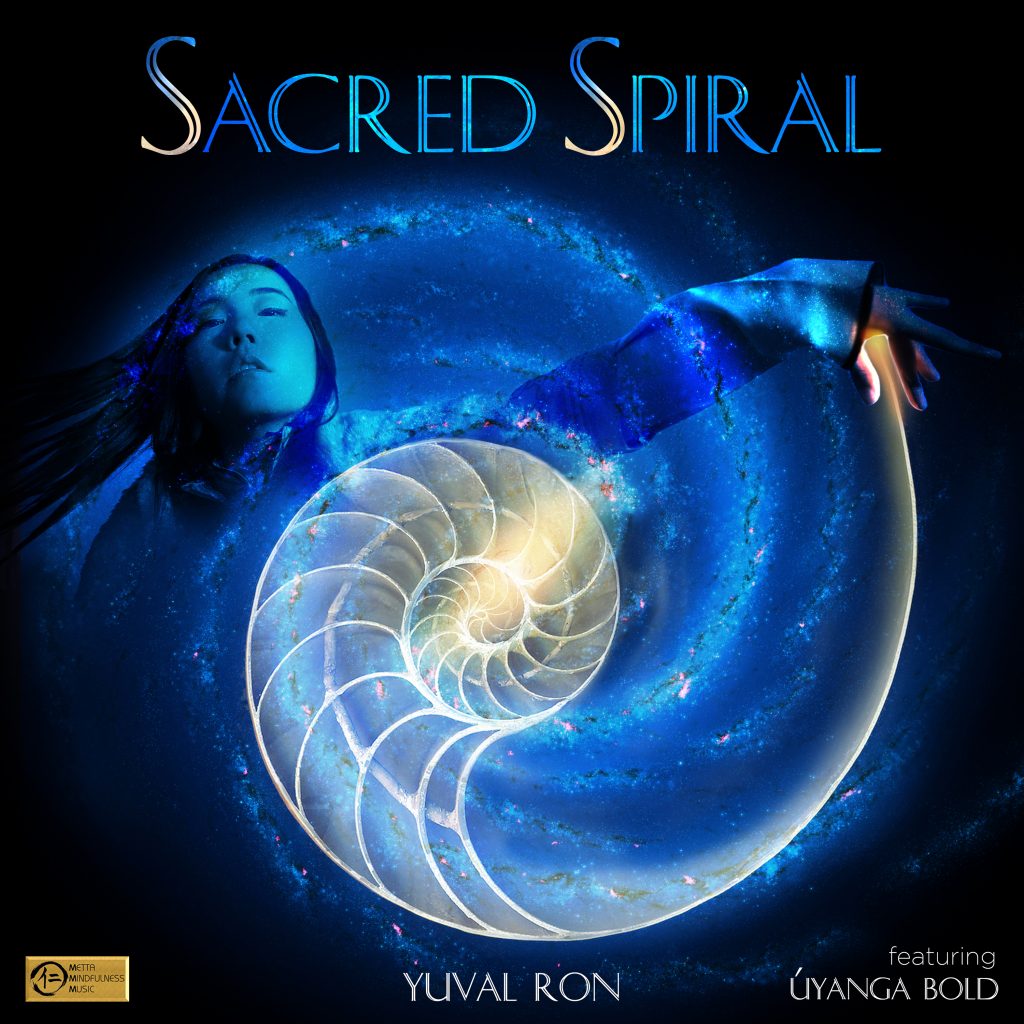 Yuval and Úyanga are joined by a masterful group of contributing musicians, with instrumentation ranging from Sitar (Pandit Nayan Ghosh on Water of Forgiveness), Jaw Harp (Chugge Khan on Voice of Freedom), Didgeridoo (Andjru Werderitsch on Deep Earth Chant), Bansuri flute (Shye Ben Tzur on Mysteries of the Heart), PanArt Hang (James Hood on Mind Vision Invocation), Flugelhorn (Andrew Carney on Voice of Freedom), Glass harp (Brien Engle on Ethereal Voyage), Cello (Dennis Karmazyn on Darkness and Light) and Gongs (Kenneth Goff on Deep Earth Chant). The result is likely to be one of the most bold and original releases you’re likely to hear this year.

These deeply intentional healing sounds are infused with ancient wisdom and perfect for meditation, yoga, mindfulness, creativity or relaxation.

About “Sacred Spiral”:
Music meditations on the “more-than-human world”*; the sacred energies and elements of the inner and outer worlds. A tour de force of Úyanga Bold’s astounding voice, full of enchanting colors and deep emotions, invoking the languages of spirit and material worlds as one. Music beyond borders, styles, genres, or categories, leading the listener on a deep and moving journey within.

*A term coined by the American ecologist and philosopher David Abram, referring to a commonwealth of earthly life that includes human kind and its culture, but which also exceeds humanity. A realm in which the human world is sustained, surrounded, and permeated by the “more-than-human.”

From the Artists:
“This music is truly stunning and healing. A breathtaking multi-colored and multidimensional journey through the sublime… May many souls benefit. The title Sacred Spiral is powerfully compelling, evoking the mystery, intelligent design, and harmony of creation.” – Úyanga Bold

“Beyond being transporting, cinematic, and meditative, this album is a breath-taking showcase of Úyanga’s amazing voice, her range of vocal expression, and spiritual depth. Her astounding vocal performances with so many colors and nuances and her ability to take my melodies to high and deep places are the wonders of this project. I am grateful to Dr. Richard Gold who initiated and supported this unique undertaking” – Yuval Ron

Important Note on Sound Quality:
“Sacred Spiral” is a high quality audio release best heard on CD or wav. file. Most music platforms provide low quality streaming and mp3 files.If you wish to get this album in full quality audio, full vibrations music tracks, you may get CD’s or Vinyl, or you may download the high quality audio tracks wav. files from https://yuvalronmusic.com/store/ (all Yuval Ron’s world music, film music, dance music, and solo albums are there), and from https://mettamindfulnessmusic.com/store.html where all his meditation, yoga, Qi-gong, Ayurveda, mindfulness, healing sounds tracks are available.

To celebrate the release of “Sacred Spiral”, Yuval Ron, and Executive Producer of Metta Mindfulness Music, Dr. Richard Gold, hosted a live stream event on February 6 as they took an inside look at the creation of Sacred Spiral, a meditative and healing album featuring the world-renowned singer, Úyanga Bold.

Participants got to listen to excerpts of this enlightening music, watch behind the scenes videos on the creation of this album, and hear from the composer, Yuval Ron, and Executive Producer, Dr. Richard Gold.

The performance has since been made available in full on Youtube.