My friend and colleague Heather Jacks at The Noise Beneath The Apple, a favorite New York City-based music blog of mine, has launched a compelling/exciting Rockethub campaign with an inspiring goal (full details below). I hope you help her achieve it! 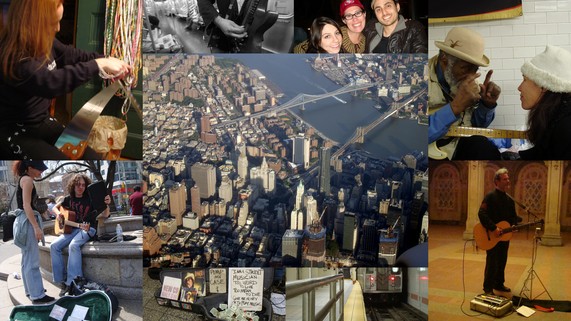 Proceeds from the RocketHub campaign will cover the multiple-use licensing of the song, the entire recording process including studio rental and staffing, the editing, mixing and mastering of the track, and the production of the finished product, to be determined. After all costs are covered, additional proceeds will go towards TNBTA’s scholarship at Brooklyn College for an arts/journalism student. RocketHub supporters can choose from an array of awards including MP3 downloads, time in the studio on the day of recording, and dinner with the directors in NYC amongst others.

The “New York State of Mind” recording project is just one of many successful offshoots to The Noise Beneath The Apple’s initial endeavor, which is a limited edition, hardcover, art-style book celebrating the busking culture and street music scene of New York City. The book is over 200 pages long and includes photos, interviews, and commentary from notable artists such as Bob Dylan and Pete Seeger, as well as an audio component on vinyl. It is the vision of music journalist Heather Jacks. A book release party is currently scheduled for May 16, 2013 at Martin Lawrence Galleries in NYC.

“While working on this book, we thought it would be cool to bring all of these street performers together under one roof,” says Jacks. “We wanted to create something truly genuine, authentic and unique, to capture a piece of the busking culture in a way that would be far bigger than any one of us individually.”

For more information on The Noise Beneath The Apple, please visit www.thenoisebeneaththeapple.com, and contact Laura Goldfarb of Red Boot Publicity (Laura@redbootpr.com, 617.407.7284).