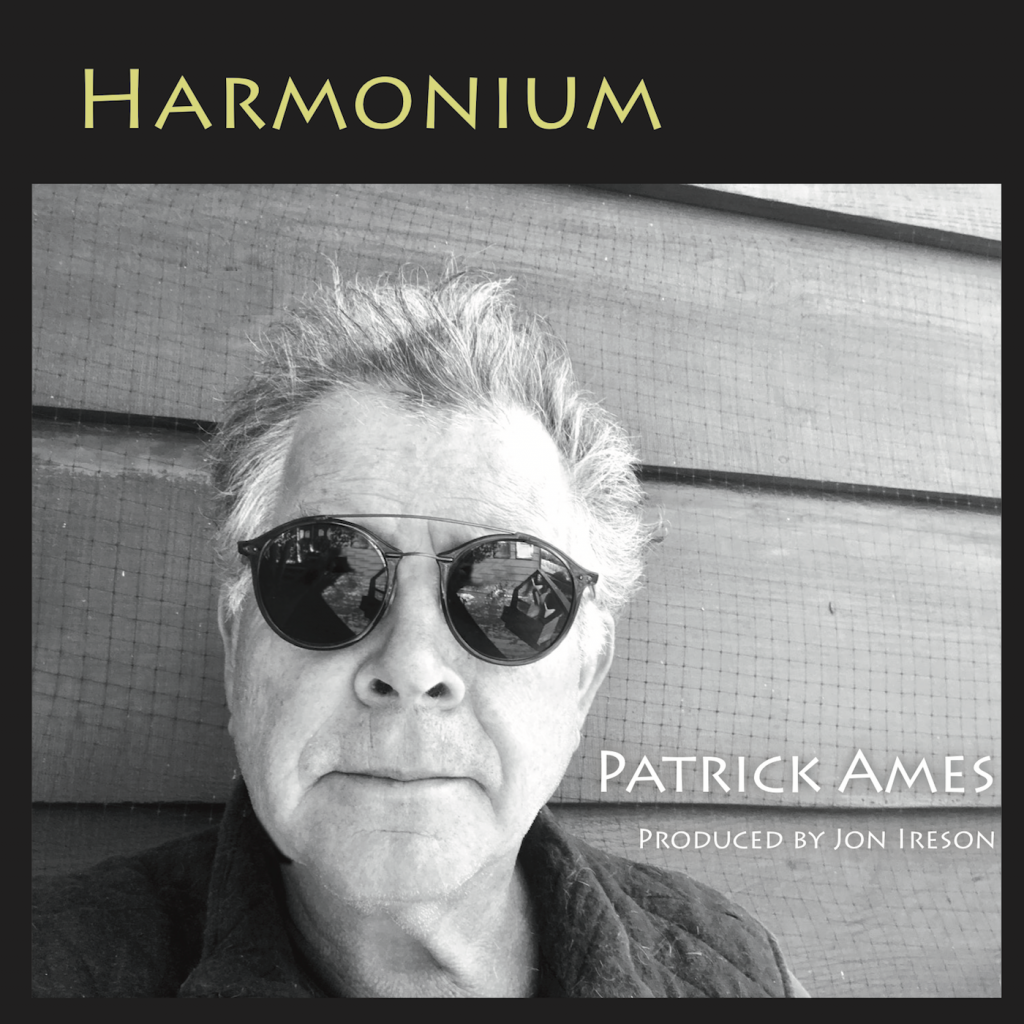 Singer Songwriter Patrick Ames is no stranger to profound lyricism and arresting emotion in his stripped-down musical offerings, and new album “Harmonium” is undoubtedly his most powerful and life-affirming collection to date. “Harmonium” is a lean, 7-track album deceptively heavy on raw, beautiful expression of the human experience. Patrick’s poetic, intuitive poetry and vocal delivery reveal intimate wisdom and a relentless pursuit of truth, no matter how atypical, whimsical or challenging. Always topical, the songs on this magical collection range from the hard-hitting universal truth of “No People Are Supreme” to the heart-on-the-sleeve honesty of “Is It Okay to Complain” to the sublime closer, “Grace”. Written and conceived in Patrick’s home vineyard, the songs are about as immediately natural as it gets. Because of it’s lean track listing and purposely vulnerable, raw approach, “Harmonium” becomes all the more affecting. Frequent collaborator and veteran producer Jon Ireson puts his distinct imprint on each track. 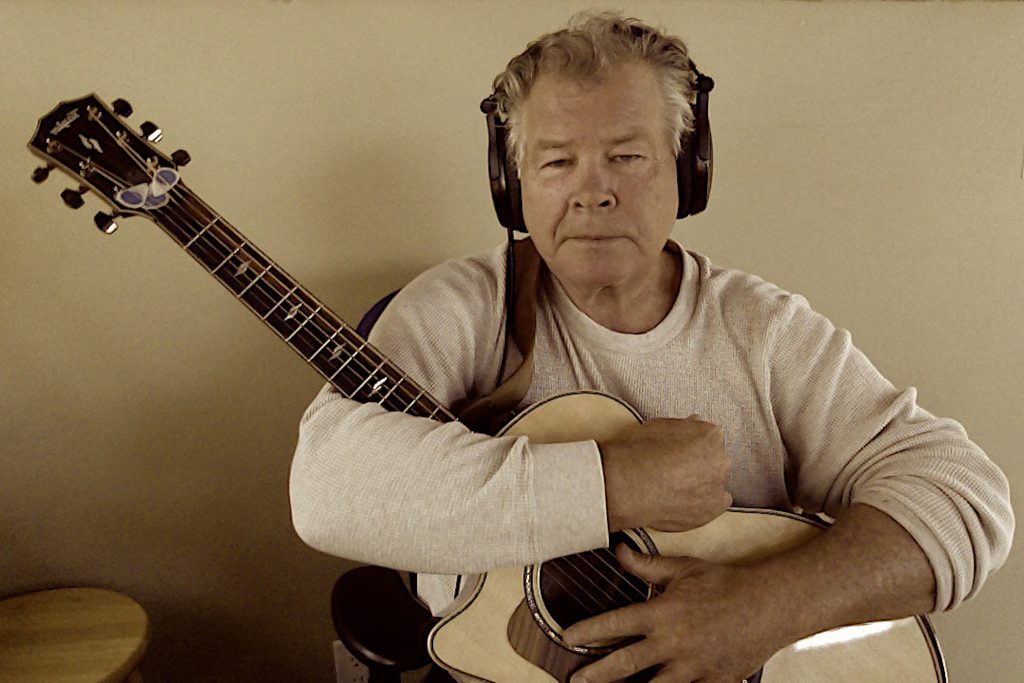 From the Artist:
We interrupt this In the Vineyard blog with the essence of what I like to do while living in the vineyard: write music and record it.  Enjoy the new LP. It’s available everywhere online.

Harmonium is the title of Wallace Stevens’ first book of poetry (1923) and I happened to be reading it while in my music studio about a century later, during the 2021-2022 Omicron virus wave. The poems were inspiring so I borrowed the title for a new music project and then buried myself alive for about three months trying to emulate the inspiration. I was also trying to ignore the news, the virus wave and then the war in Ukraine, trying to be positive, inspired, busy. As such, there are no grand overarching themes in this new LP. Only a purposeful exploration of what I want to matter again. That’s why there’s Grace, the LP’s finale.

Producer Jon Ireson propelled Harmonium within this minimalistic songwriting space. He kept it intact. He kept it curious. His bass lines throughout the whole LP are gorgeous and deserve their own listen. But he also played or programmed almost all the instruments, continuing our long-distance collaboration left over from the Virtualistics LP.  What a wonderful joy to work with such a talented musician and producer! His guitar soloing on DontChaWanna is classic and his arrangement and mix on No People Are Supreme is mesmerizing. Every song has something special and you’ll notice right away that Jon changed my voice microphone setup – finally we could get down into some raspy crevices.

Chana Matthews joined us at the end to record and her voice and spirit are beautiful and soaring and we had fun in the studio as you will hear.

Harmonium is a well-produced mashup of poetry, art, music, and 2020’s social commentary. It’s where I went to heal and it’s what I came out singing.

Harmonium Tracks:
No People Are Supreme
Sometimes
Will I Ever Be Noticed
DontChaWanna
Is It Okay to Complain
Last Night Was No Mistake
Grace

Track 1: No People Are Supreme

The refrain came in an instant. I don’t know from where but maybe a result of my constant doom-scrolling on the mobile. World news is tough to digest but one message kept coming back during this dark times: no people were supreme. After the first take it started to sound like the Doors and then it became a magnet for more similes as we progressed. I put in some trippy lyrics for 1960’s Jim Morrison, and Jon Ireson, the producer, piled on with vinyl record scratches to start the track. Jon’s instrumentation is both present and supportive, a difficult task with such subject matter. At the end I wanted to showcase the refrain and its ability to make the listener sing the words, repeat the phrase, and make it true if only by repetition. To be frank, I wish this had been written so many decades ago – maybe it would have done some good by now.

How do you write a forceful song about climate change when the world hasn’t done anything about climate abatement for the past 60 years? What to do? I went back to the cadence and style of the social injustice folk song, Joan Baez, Peter, Paul and Mary, dozens more, and stripped it down to the voice and a C-F-G melody progression. Again, there’s the refrain, this time of the song title, and the whole thing reminds me of a poetry reading. Jon keeps it that way, too, in his bass lines and in the mix of the accompaniment by Chana. The voice you hear me singing is my 7am Sunday morning voice, without coffee, dragging my ass out to the studio space in the cold, misty December weather just to catch that recording on the first take.

Track 3: Will I Ever Be Noticed

Love and atrraction in the age of masks.  Clean funky little guitar strums, nice little beat, this one slides along effortlessly with the help of Chana’s backup vocals and Jon’s bass fills. Great outro. It’s actually an older song that I recorded a long time ago although now it’s with a shorter story line. That’s legal. You can go back to your old songs and rewrite, rework, and reissue as a different thang. It’s a take on the third-man theme during the age of masks: boy wears mask and is all but invisible to girl and nothing happens. Chana came in at the end and gave it that brightness. The song lifts effortlessly and takes off under its own momentum. Jon gets on a little groove and everything is mixed perfectly including that soulful rhythm guitar. As a story, the song isn’t very elaborate or special, just street scenes until the all-important bridge where we learn that he’s complaining she doesn’t recognize him with the mask on, the one that he’s been wearing for the past several weeks. I’ll let you imagine what it looked like.

This was originally the slowest track on the LP, then it just started to rock. I think it was the Stratocaster that sits near my desk, as is usually the case with any of my uptempo tracks. Once Jon got the final lyrics and the Telecaster rifs, he ran with it. The attack was upped, he played lead guitars, synth, and worked the kit just the way I like it ( fills pass before you notice them). And who can’t like the lyrics. No poetry here. Just a refrain that begs your accompaniment when stuck in commuter’s traffic. Chana came in and owned it and Jon’s masterful mix electrifies the track. It’s the energy track of the LP and placed perfectly in the middle for momentum.

Track 5: Is It Okay to Complain

This is the one track on the LP closest to Stevens and the whole poetry thing but it’s not a poem that I set to music, though, it’s a song that uses songwriting devices to tell a universal story about a parent and their offspring as they age together. I had no one in mind when writing it. It’s a story of two people, and the story line uses repetition of key words and ideas, that change stanza by stanza, such as “the Fates” and the reprise of “Look at you now.”  I pair those repeating elements with the music, and the melody, and it’s the only track to have an actual guitar solo, done early on but left intact to reflect the strong emotions running through this parent and child relationship as they grow older. Jon keeps the track focused, not over-produced, slightly bare bones with all the emotion and family angst intact.

Track 6: Last Night is No Mistake

This was the first song I wrote for Harmonium after experimenting with a delayed plugin on the guitar. I thought it emulated that afterglow feeling after a new relationship. Was the date pre-ordained?  Are you meeting your future spouse? How long did it take? Thus the soaring guitars that play off of one another and Chana’s duets. I finished my portions and sent them to Jon the first of anything in many, many months: “Hey, wow, I did something interesting! Wanna hear!”  He was kind, and complimentary, and it set me off to do six or seven more songs.

The last song to be written, having come out of the other end of the pandemic  alive, again, there was a lot to be thankful for and I wanted the LP to end that way. Here’s Grace:

Can I get some more butter on my toast?

“Patrick approached me not long after we had wrapped the Virtualistics record. The pandemic had given him extra time to reflect and plenty of subject matter so once the songs started flowing, they came quite quickly one after another. ‘Last Night Was No Mistake’ was the first thing he sent me and the tone of the track mixed with his initial dreamy guitar instantly gave me a lot of ideas. I knew we could easily follow this vibe and make a record. The songs are varied and compose themselves from a wide array of inspirations. I practiced a sort of complex minimalism, giving the songs some lush texture while keeping Patrick’s themes at the forefront. My personal favorite is ‘No People Are Supreme’. A simple but powerful idea backed by a hypnotic backing track. I also have a soft spot for the closer ‘Grace’ which is beautiful in its gospel simplicity and warm spirit.” – Jon Ireson

Hear Patrick Ames on our on our Best New Music of 2022 Spotify Playlist.