Patrick Ames Kicks Up the Jams On Funky, Soulful Rock & Roll Single “You Make Me Scream”

Patrick Ames teams up with Producer Jon Ireson for a funky dance song destined for the summertime charts. It may be hot, it may be the middle of the Pandemic, after months of quarantines and isolation, but Ames wants to dance. And dance it is, with Ames’ vocalists Chana and Mikaela Matthews, and Jon laying down the bass line and solo guitars. There’s plenty of punch to quench your late Summer woes. 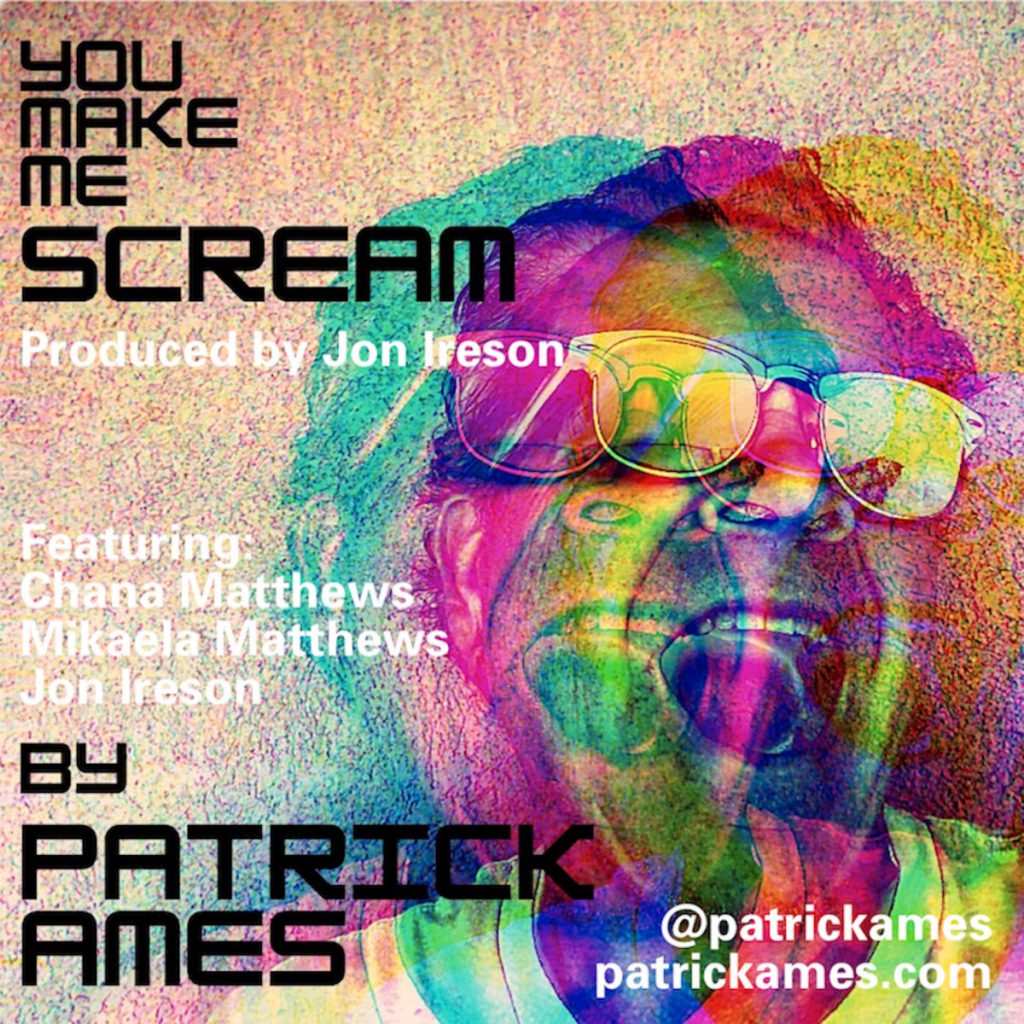 About “YMMS” – Liner Notes by Patrick Ames:
You Make Me Scream (YMMS) is dance music. After a year writing serious songs and protest songs about our country and the politics, and experimenting around on the edge of folk and other genres, I just wanted to dance. And in the middle of the Pandemic, after months of quarantines and isolation, I wanted to dance. I usually write songs beginning with one guitar riff and one vocal riff, and then place them together. YMMS was the vocal riff and it pretty much starts and stops there. With only 9 words in the entire dance song: “You make me xxx, so tenderly”, I’m more proud that I didn’t use “Baby” anywhere. ; )

I’ve decided that dropping singles is much easier than doing EPs, or LPs, given the Virus, so I’ve decided to write and release every few months, and then at the end I can bundle up the singles together. YMMS is the first one with this new approach and one of the real issues was that everyone was/is sheltering. So I supplied my singers, Chana and Mikaela, with their own microphone, and Chana built a voice box to eliminate noise in their apartment (they are sheltering too). We had Zoom sound engineering 101 and a lot of unusable files in the dropbox.

Jon Ireson came in half way, as Producer and fixer. I recorded the rhythm guitars and vocals, with temporary percussion and bass tracks, while Chana and Mikaela sent in their parts. Jon is a wonderful producer and musician, and he filled in the bass and the guitar leads, but most difficult, he worked with a variety of sound files recorded in different places, on different equipment, recording at different levels, and he still unified it. YMMS sounds as good as it does because of Jon.

There is nothing music does better than make people dance. At one early point in the song writing process, I had “You make me scream, democracy” and the whole point was that democracy is exasperating. But the symbiosis between systems of government and funk music just didn’t jive, so I went back to “so tenderly” instead of “democracy”. And that’s as close to serious that I got.

Quote from Jon Ireson:
“With ‘You Make Me Scream’, Patrick Ames took a break from his more pointed, politically-charged work to put out a fun, light-hearted track for the summer. We arrived on a treatment that treaded the line between Muscle Shoals soul and Minneapolis funk. As usual, his great backup singers Chana and Mikaela gave us a lot to work with. I lended a bass line to give it a little punch and pop along with some other odds and ends.”

“You Make Me Scream” , featured on new album “The Virtualistics”, is out now on all platforms including Bandcamp.