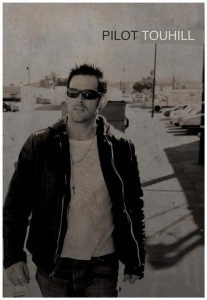 Pilot Touhill is a Singer/Songwriter based out of Los Angeles, California He has received critical acclaim from many music critics and webzines around the globe thus far in his musical career and is known for his impressive and highly creative approach to the songwriting craft. Refering to one review – “Pilot has effortless talent when it comes to producing melodies that flow naturally… he comes up with remarkable work.” LA Weekly. Need I say more?

“Keeping Secrets” is his latest release and the result though far from a self-indulgent ego trip, rather a moving and elegiac artistic statement from start to finish. This is not your overly predictable Ramon Noodle Indie Rock band. Instead Pilot Touhill and his band have way too much precision and clarity to live in the shadows of overly-predictable Indie Rock-Pop. Indeed this is clearly evident in songs like “Never Gonna’ Come” and the title track which methodically ups the ante to a very respectable level of catchy musical craftsmanship and addictive rock that transcends typical pigeonholing. Indeed there’s reason why Touhill is becoming more and more popular each and every year. The music is also commercially viable with a fresh sound and a rock solid vibe that holds the attentions span of the listener perfectly. In a nutshell this is Sublime meets The Red Hot Chili Peppers. The 6 song line-up appeals to many listeners with a wide variety of musical styles – but is easy going ride and a powerful voice for music fans out there who have had enough of the musical status quo.

Final Word: I would imagine in time we will hear more from this amazing artist in the near future. No doubt Pilot Touhill has carved a marketable niche thus far setting himself up for marketable success over the years to come. But for now I can honestly say this is one artist that clearly gives you a musical snapshot that is highly original, unique and dare I say comfortably numb in scope.