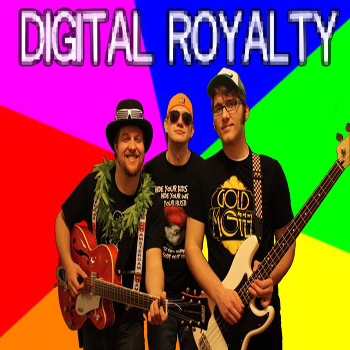 Digital Royalty are an alternative/experimental band from Chicago, Illinois who are a punk band at heart. Unlike many punk rock acts, they thoroughly embrace the internet as a tool to promote themselves, and they take it one step further by writing songs based on internet memes, for example. The track sent to me today is a track called “Homosexual”, which was written because two of the band members are gay, and the band wanted to write a song that was “LGBT friendly”. There’s absolutely nothing wrong with that, so how is the song? First of all, it’s a comedy parody of “Yellow Submarine” by The Beatles played with punk rock stylings. While the band does fairly well with their gritty, upbeat take of the song, the vocals are relentlessly flat, and even for punk rock, it prevents the song from being as effective as they would want it, I’m sure. It really crosses the line between punk rock abandon and a couple of guys who are just goofing around. The buildup at the end is catchy, and Digital Royalty show some real party rock spirit that makes me curious as to what they could do with more original material. Listen to the song and decide for yourself below: