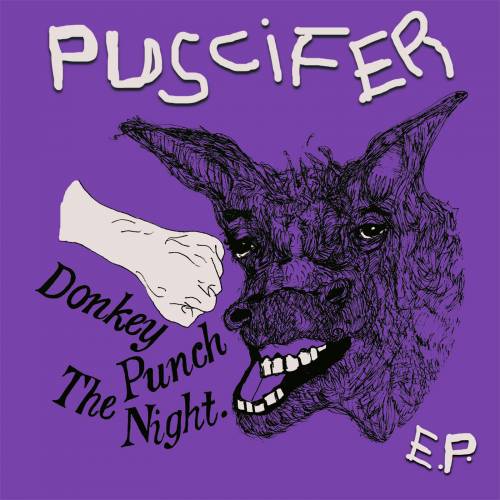 Puscifer (Maynard James Keenan, Jeff Friedl, Matt McJunkins, Mat Mitchell, Carina Round and Josh Eustis) are back with a new EP entitled “Donkey Punch The Night”, and while it’s always a good thing to have new material from Mr. Maynard James Keenan, it’s important to note that this release shouldn’t be considered as a proper album, or a follow up to the absolutely brilliant “Conditions Of My Parole“, which got my album of the year vote. In fact, it would be difficult for Conditions to even get it’s due. It’s that good, so if you haven’t heard it, start there.

“Donkey Punch The Night” shows off Maynard’s sillier side, and of course, he knows that humor and fun are just as important as anything spiritual or serious, so whims get explored. “Bohemian Rhapsody” is well done, and yet it feels completely unnecessary. No strange quirks or innovation has been added, and key vocal lines were lowered in order to fit Keenan’s range. It would have been interesting to hear the song re-interpreted and not simply re-played to this extent. That being said, who am I to complain? It’s tightly played and makes for an enjoyable listen.

“Breathe” brings out the sexy, courtesy of musical prodigy Carina Round, as she trades off slithering vocal harmonies with Keenan. It’s a solid original track, with menacing synths and a thick, downtempo beat. The track’s lyrics, while simple, are interesting as well, bringing the spiritual aspect into the physical, speaking of no separation. Let the body do as it will.

“Dear Brother” is more upbeat, with a funky, southern rock feel that pleases but doesn’t quite take off. It’s as ethereal as anything you’d expect from Puscifer, just missing some of the depth from previous efforts, and it’s hard to sink into when the lines “donkey punch the night” are sang.

The cover of Accept’s “Balls To The Wall” is where things really get interesting, ironically. I didn’t expect this track to come across as the most sincere and absorbing on the EP, but that’s definitely the case. Instead of rocking it out, the band opted for an emotionally charged and laid back commentary. Atmospheric and cool as ice, this is a wholly new type of anthem. Definitely re-worked and inspired.

The album closes with 3 industrial/electronic/trip hop remixed, all interesting and worthwhile, but none essential listening. Overall, “Donkey Punch The Night” is a fun addition to Maynard’s discography and a great release to tide fans over, but I think it’s safe to say that most fans would much rather him work on new Tool than some of the material presented here.