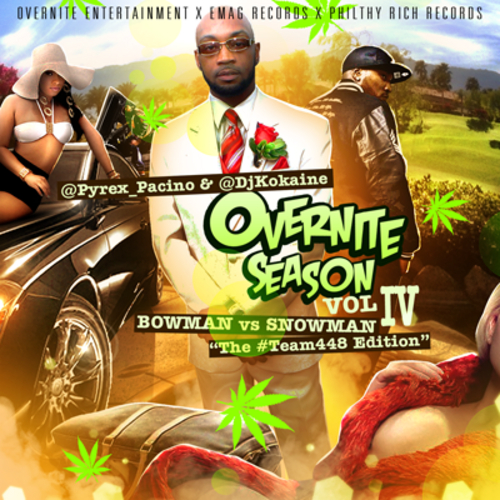 As some of you are aware, I happen to be a huge hip hop fan. Like many people who grew up in the suburbs, I fed myself a steady diet of rock, metal, and yes, hip hop. Alongside popular bands like Nirvana, Nine Inch Nails and Alice in Chains, I would relate to Cypress Hill, Public Enemy, Run DMC, even Maestro Fresh Wes (I’m Canadian). Hip hop has evolved in many ways, and it’s great to see it still thriving. The popularity of the mixtape format has gone through the roof, and it seems like even the biggest players in the game are releasing mixtapes between full-length releases now. Mixtapes also happen to be the lifeblood of the underground.

Pyrex Pacino‘s new mixtape is called Overnite Season Vol.Iv Bowman Vs. Snowman “The #Team448 Edition”, and it’s quite impressive. It’s funny that Pyrex mentions NWA as his first major musical influence, because when I hear him rap on the “I’m Just Sayin (Intro)” he sounds similar in tone to the great Easy E, inspired and full of machismo. “Inspiration” is heavy, dirty and mean – don’t expect this mixtape to open up with any ballads. This is an experienced rapper out for the kill. The tracks are lean with no wasted time. DJ Kokaine’s production/beats are infectious throughout.

Highlights include “Go Krazy”, which features a classic-sounding beat, epic enough for the anthemic chorus where Pyrex sounds unhinged, like when Ol’ Dirty Bastard sings a tune. “Lose My Mind” finds him with a more aggressive tone, with the most impressive rhyming being on the chorus, where he spits a stutter-yell, leaving rests in between lines to make each yell more impactful. Make sure you’re not holding a drink while listening to this track – you’ll spill it or crush the glass. Definitely my personal favourite. I had the chance to interview Pyrex about everything from his new and upcoming releases to his thoughts on the state of music today. 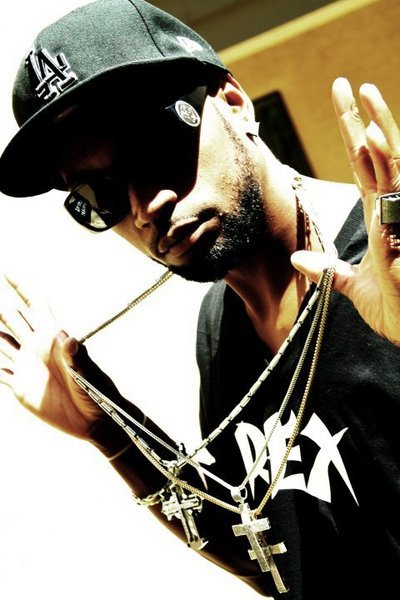 Welcome to Independent Music Promotions, Pyrex Pacino. On your new album “Overnite Season Vol IV”, I can’t think of another rapper who sounds quite like you. What inspired you to get started with rapping?

Well, I always been a music lover every since I heard NWA for the first time. I also had an older cousin (Chilla Pertilla) who also was a rapper and being around him I just sort of picked it up.

I would say yes and no because now a days a lot of people in the music business really don’t just have the passion for it, they put a quick song together and that’s it. There are also those who try and keep hip hop real such as myself, Jeezy, and one of my favorite rappers, my homeboy Young Newz. We make that music you can feel is real.

Your music videos for “Standing in the Kitchen” and “Sitting on top of the World” were strong clips for great tracks. How important have music videos been to your current success?

The videos played a major part in my success so far because without visuals you’re just another voice people hear. “Standing in the Kitchen” was actually on WSHH (WorldStar HipHop) and that gave me major recognition because I was the first from my area to be on there.

What would you say is your highest goal as a musician?

My highest goal is to make sure my artist Royalty da Plague (@royaltydaplague) gets one of the best deals in hip hop history. Besides being a rapper he’s a certified engineer and plays a major role in this industry because not only are you getting an artist – you’re getting someone that knows music from both aspects.

What current artists do you most admire and why?

I admire more underground artists because we are on the same level and I can relate to them, artist I admire would be Chilla Pertilla (@chillapertilla), Royalty da Plague, Young Newz(@youngnewz), Canary Yellow Chello (@canarydaboss), James Cagne (@jamescagne), Get Gwop (@igetgwop) and Jeezy.

What advice would you give to aspiring hip hop artists?

I would tell artist to do them and do not I repeat do not believe that every rapper is balling because a lot of them ain’t no where financially.

I have Overnite Season Vol.IIIV “Xanex Edition” dropping with my artist Royalty da Plague hosted by Dj 1Hunnit (@darealdj1hunnit) and following that I have my album More2Me dropping. Royalty also has 2 mixtapes that will be dropping soon; Trials & Tribulations hosted by DjTay DontPlay (@djtaydontplay) and Among the Elite.

It seems like you have a team of people around you who believe in your music. How important is it to have a community surrounding an artist?

It’s huge for an artist to have a positive and strong support cast because with everything that goes on we always need those people in our corner to have our back during the good and bad times.

How can people get a hold of your new mixtape?

It is also available on mixconnect.com as a free download also, you do not have to sign up on this site either because it is also a featured and sponsored mixtape on this site as well http://mixconnect.com/listen/Overnite+Season+Vol.IV+Bowman+vs.+Snowman+Hosted+by+Dj+Kokaine-mid18447