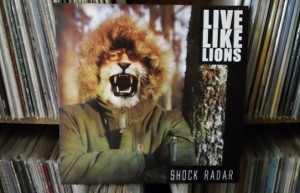 Bio: Shock Radar is the experimental art rock project of NY songwriter, multi-instrumentalist and painter Lee J Diamond. He has worked as a session musician for members of The Verve, Stabbing Westward, Small Black and The Slits. After touring and recording for acts like The Feud, Aerial Love Feed/Rockethouse, and Blood City, he is now giving life to his own material as a singer and composer. The eccentric artistic styling of Shock Radar’s ‘Post-Pop’ songs are fresh and unique. Born and raised in NY where he worked at several record stores till attending Boston’s Berklee College of Music on scholarship, and further studying art and journalism at New School University, Lee J Diamond has climbed his way to the top of the city’s music scene, simply doing what he does best, mixing and playing all styles from around the world. His live band plays frequently around Manhattan, or you can follow his

I have to say I was extremely impressed with this piece “Live Like Lions” It made quite the first impression and each second possessed my full unadulterated attention. To be honest: I expected cheesy Indy Hard Rock that was extremely predictable and shallow in nature – very compatible for a mass audience. What I discovered was actually quite the opposite. The whole song is wonderfully conservative yet full of what I would call explosive energy with music that appeals to so many different senses on so many different levels. It reminds me of classic Pearl Jam, Soundgarden, and Nirvana. On the other side of the sonic spectrum I can hear Audioslave, Guns and Roses and even Airborn. I can also hear the slight Alternative Rock, Hard Rock, Classic Rock influence in there as well. What I really like about Shock Radar is there is no attempt to sugar coat the truth or deliver what I call over the top alt rock. Cheezy music with an over the top front man via top flight sampling, cookie cutter songwriting via a mix that sounds more like a commercial than a piece of music. None of the above here! “Live Like Lions” will also appeal to both advanced and novice listeners alike – hence some of the odd time signatures at curve ball rhythms and progressions. Whatever kind of listening level you’re on – some will identify with things while others will not. Like a three layered cake “Live Like Lions” is one song that has allot of depth and has so much to offer. Weather it’s musically, lyrically, inspirationally, emotionally, spiritually – if you feel like music is taking us in the wrong direction than rest assured Shock Radar feat. Lee Diamond is taking us back in the right direction with this release.

Bottom Line: Shock Radar will affirm your faith in music again. Lee Diamond is a unique, hardworking artist that knows their way around a stage and knows how to write you a compelling piece of music. At the end of the day “Live Like Lions” is one hell of a wild ride and delivers an action packed 4= minutes of musica exuberance.It also covers all the bases delivering music that covers all the bases: Alternative Rock, Hard Rock, Classic Rock.