Slip Inside the MAC As You Pass By

Slip Inside the MAC As You Pass By

Arizona’s Mesa Arts Center triumphed in its first art show since the pandemic this past September.

Opening night of the Fall 2021 showcase was a vaunted affair with live music, local vendors, artisans, a film showcase, and people out enjoying the night. The main attraction was the four unique art exhibits inside: “The Beyond Within,” featuring work by Alex Grey and Allyson Grey; “Divide Paradigm,” a collection from 16 artists working with varying mediums coalescing around the idea of Visionary Art; “Lucid Fate,” from Wiley Wallace; and “Vision Seeds,” by Amanda Sage.

The work in each collection stretches, and reaches for the farthest psychedelic id. The artists explore the limits of space and color for the sake of illusion. The exhibits can dip from pure ethereal hypnosis into chemical burn nightmare.

At the end of the hall was “Lucid Fate,” a vibrant collection from Wiley Wallace.

His paintings deal in death and youth simultaneously, capturing sacred moments of childhood when no adults are around. Wallace grew up in Arizona, and currently lives in Phoenix. His scenes all take place in his desert home, using his eye to calibrate perfectly sharp canyon scenes matching the sun’s color response. His landscapes are interrupted by figures in a deathly glare. Children are entranced by a dangerous wonder–studying a portal, or trusting hooded skeletons whose bones pump with cartoon nuclear green and kneel in a protective stance. They are guides, molecularly in the garden of life. The kids are hypnotic, seemingly unaware, or unbothered by their presence.

“Divine Paradigm” is a group show with a range of mediums inhibiting the theme of Visionary Art.

Wallace’s use of color is heart-stopping. Two patrons on opening night were stunned by the glow achieved and wondered if there might be a light bulb affixed to the back of the painting. He somehow has figured how to paint light. The 16 artists, with international reach are, Orlando Allison, Marco Albarran, Kelsey Brookes, Michael Campbell, CRYPTIK, Daniel Martin Diaz, Chris Dyer, Martina Hoffman, Android Jones, Krystleyez, Kyllan Maney, Ben Ridgeway, Reynaldo Christopher Surposa, Jen Stark, Beth Ames Swartz, and Peter Westerman.

The oil painting, “Magnanimous” from 2019 by Surposa, is a multi-faced being sitting calmly but seemingly inhabiting the likeness of every deity from the deep past and long future. “1.618 (Golden Ratio) Red” by Kelsey Brookes uses pinpoint edge to create a moving web in a single shade of acrylic red. Step back and it will engulf you like visible atmosphere; step closer and a dizzying optical illusion is afoot.

The next exhibit, The Beyond Within, is by husband and wife duo Alex Grey and Allyson Grey, two of the greatest contributors to the cannon of psychedelic art. Walking into their shared gallery it’s hard not to head right for the black paper stretched across the back wall. “Star Dancers,” a joint work by Allyson and Alex, is 32X8 feet scrolling across the length of the museum wall. It’s a heartbreaking ephemeral dance party with all our inverted friends. Every larger-than-life character peeled down to its final bare strips of muscle vein and bone. Allyson Grey had a series of book-sized pieces, each with incredibly intricate spiral patterns. It was like looking down a spiral staircase, each line getting smaller and tighter. From afar it looked like neon signs of a city or colored gears turning, but up close you see the sketch continue toward endlessness. 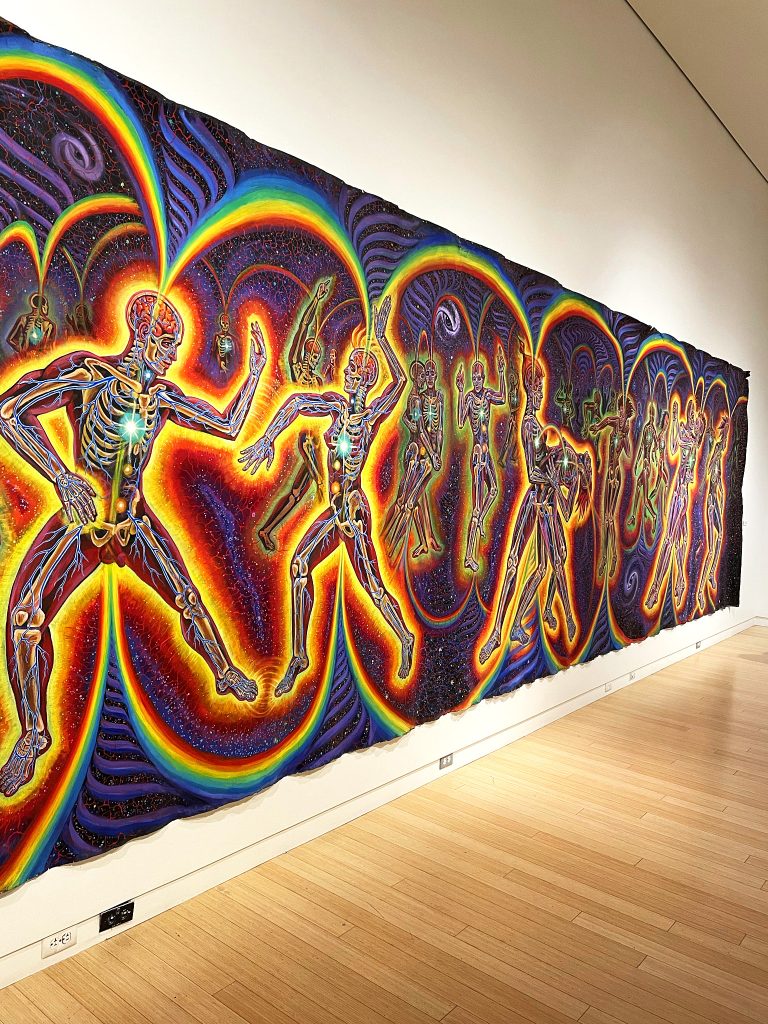 Alex Grey may mostly find renown in the music world for his work with Tool, the iconic prog-metal band. Grey added to the group’s mystique, designing the cover art for their albums Lateralus in 2001, and 10,000 Days in 2006. A number of other musicians have used his paintings including David Byrne, the Beastie Boys, Meshuggah and Bassnectar. On display was a full drumset Grey painted for Tool drummer Danny Carey that was used on their 2019 tour for Fear Inoculum. The set had its own room, but will have to exit the Arts Center for Tool’s upcoming largely sold out North American tour starting January 10, 2022 in Eugene, Oregon. It will return to Arizona when the band plays Phoenix on January 21.

Grey’s art will speak to anyone who’s experienced a psychedelic journey, good or bad. He fillets the layers of physical existence and shows life as the molecular maelstrom it really is. Egoless and adrift, we find ourselves in an Alex Grey painting. 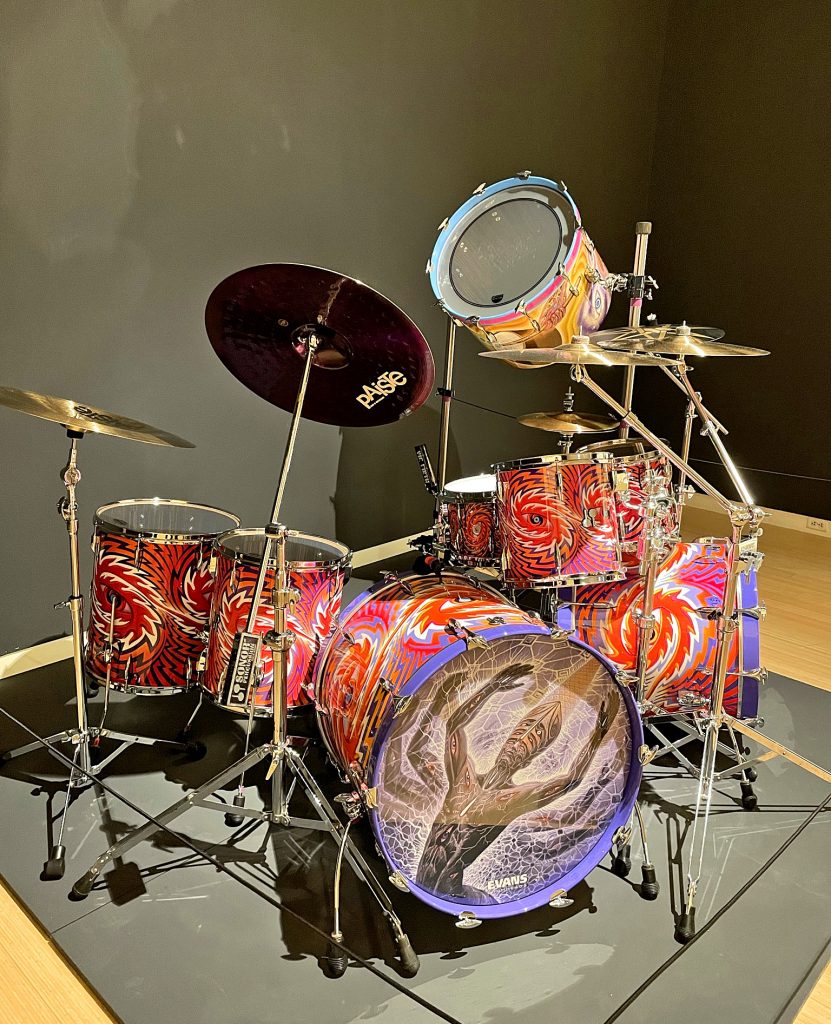 Colorado artist Amanda Sage really pushes the depths of what the eyes can see with her exhibit, “Vision Seeds.”

You walk in the room and at first glance it’s the portrait of a woman, but look closer and there’s a whole house burning in her hair. A scene of a giant wave holds endless imagery–monkey faces in the trees, angels playing trumpets in the clouds. You will find new figures and patterns, fresh meaning in her paintings each and every new time you come back to them. They are astounding for their deliberate detail. Sage paints with passion, every brush stroke teeming with life. Her illusions are from the dreams that come while sleeping on mountaintops.