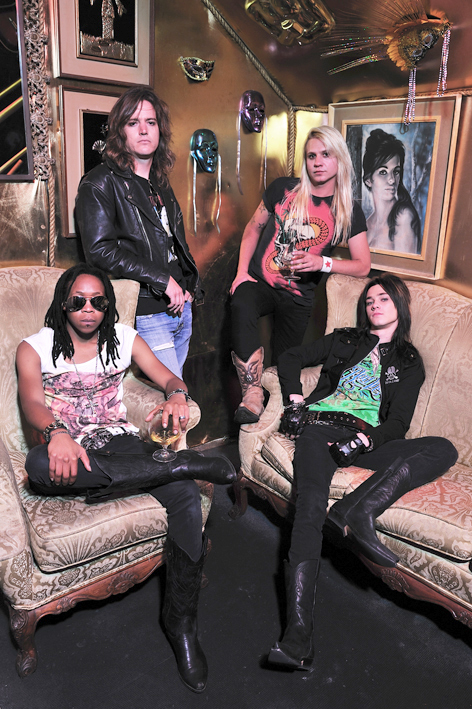 “Sex, drugs and rock n’ roll” isn’t a term you hear very often anymore. Squares abound. The mainstream masses are more likely to indulge in reality tv, fast food and karaoke, in fact. But that’s not to say that the straight and narrow path is ideal by any means. The idealism of pushing things to the edge from time to time is still celebrated by those who truly know how to live. And after hearing the perfectly pummelling “Sex, Drugs, & Rock n’ Roll” by South Africa’s 4Q Rockband, I’d be willing to bet that these guys live it up, and I fully support it. I previously reviewed “I’m Hoping”, and was impressed, but THIS, in my view, is 4Q Rockband’s ticket to success.

It’s no wonder 4Q Rockband is working with the legendary Stuart Epps of Led Zeppelin, Elton John and Twisted Sister fame. His production sensibilities coupled with the band’s songwriting make this sound like both an instant classic and a bona fide hit. I’d go as far as to call it the best party song of 2011.

Bursting out of an atmospheric, Punk Floyd-esque intro into a fast paced guitar driven romper, vocalist Kel Makhaye absolutely attacks it right away and never lets up.

By the time the chorus arrives, there are perfectly placed backup vocals and more layers of guitar unfolding – all building intensity in service of an extremely gritty party anthem. Moreover, it’s sung with SPIRIT! “Sex, drugs, rock n’ roll….Take a ride on the Devil’s bone” could easily be chanted by stadiums full of fans very soon.

You would be hard pressed to find a hard rock band out there today who could belt out a track like this with equal bombast. I haven’t heard Buckcherry release anything nearly this good. In fact, this song is one of the few that I’d say is truly reminiscent of early Guns n’ Roses. This is take no prisoners rock at it’s best. So get yourself some whiskey and a bag full of pills and hit the town hard.

You can hear “Sex, Drugs & Rock n’ Roll” at 4Q Rockband’s official site. We can only hope for a music video.

To read my interview with Stuart Epps himself, click here.

Legendary Record Producer Stuart Epps On The Music Industry And What It Takes To Be Great – Music Marketing For Serious Independent Musicians
November 15th 2011, 9:38 am