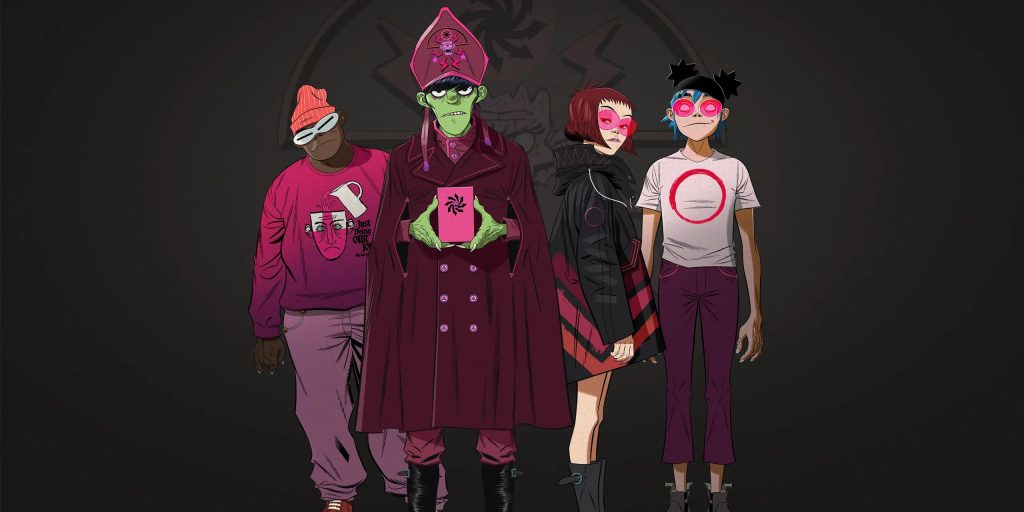 When you think about it, with his character as it is as resident megalomaniac, official 2-D torturer and founding bass player of cartoon supergroup Gorillaz, it’s sort of surprising that it’s taken 22 years for Murdoc to come up with this cult idea. With his hunger for the fame and adoration of any and all misguided souls at least as voracious as the average 80s rock star or Jordan Peterson, Murdoc has tried lo these two decades to become a cult of personality at the very least. After zapping through the vortex from Plastic Beach to WeHo and spending some time with Beck during the making of the Gorillaz’s last bespoke project, Song Machine Season 1: Strange Timez, it seems to have finally dawned on everyone’s favorite Satanist perv that the only way towards true and ultimate control over the vapid and malleable of the 21st century is multimedia enlightenment via his very own cult.

When we last left Murdoc in the Gorillaz universe, he was going through somewhat of a personal crisis. After escaping jail and doing away with replacement bassist, the equally green-skinned Ace of PowerPuff Girls fame, he was more or less ignored by his bandmates as they conscripted more collaborators than ever to create the Song Machine tracks. He was forced to re-hash the trauma of Plastic Beach and both of his attempts to poison 2-D backfired. The first ended in him poisoning himself and the second, on what was supposed to be a nice day out in negative Cairo (or a video shoot), earned him a brutal beatdown from Russel and Noodle and almost split up the band. 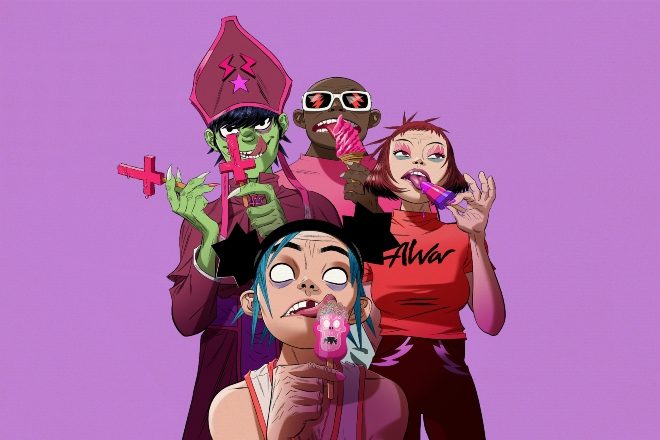 Was this rock bottom for Murdoc? Of course not. It’s a surprise to no one that his largesse knows no bounds, and the increasingly chartreuse autocrat has now reinvented himself as a guru for Gorillaz’s new album, Cracker Island, due out 24th February. According to the narrative and the album’s title track/first teaser single, poor 2-D has fallen for whatever half-baked rhetoric the now pink cassock-clad Murdoc has come up with and is now a fervent general of The Last Army. Noodle and Russel aren’t so sure, but they like the new tune and working with Thundercat so they’re back to allowing events to unfold as they will.

With the intro of afore-mentioned Thundercat collab, the Gorillaz canon in its accompanying video gets absolutely wild, with tie-ins not only to the “Saturnz Bars” spirit house, the boogie man/Pink Phantom who haunts Murdoc from Plastic Beach and Song Machine. It also possibly going all the way back to the band’s estranged first guitarist Paula Cracker and her possible connection to performance and visual artist nd well-known Satanist, Marina Abramović and the demon king Pazuzu. (whose iconography has been all over the Gorillaz world from jump). Suffice it to say, that thee-minute first video has sent the G-fandom’s heads spinning. Theories abound about why Murdoc is really starting a cult, who Paula Cracker really was/is/is supposed to be and, of course, where the band is headed next (see our favourite theory at the end of the article, though even that one was partially debunked mid-filming).

“Cracker Island” is the only video with any real storyline of the singles that have been released thus far. There are nonetheless loads of clues (and no shortage of excellent collabs) in the visualizers and lyric videos for subsequent singles “New Gold” feat. Tame Impala and Bootie Brown, “Baby Queen” and “Skinny Ape.” Full of Last Cult iconography and haunting commentaries on the current state of both the Gorillaz and the real worlds, creators Damon Albarn and Jamie Hewlett’s usual political undertones are stepped up in both intensity and frequency. Meanwhile, Murdoc looks far too pallid for anyone’s good while 2-D looks even more vacuous and brainwashed than usual – and much worse for wear.

Could it be that 2-D’s ex and possible embittered ex-bandmate Paula Cracker is possessed by Pazuzu, morphed into an uncanny likeness of Marina Abramović and entranced Murdoc into actually believing in the idea of universal love and helping humanity? In the Gorillaz universe, anything is possible. The canon is built on rabbit holes, plus the fact that the album is called “Cracker Island” seems significant. In the meantime, all fans can do is wait for more videos and clues. 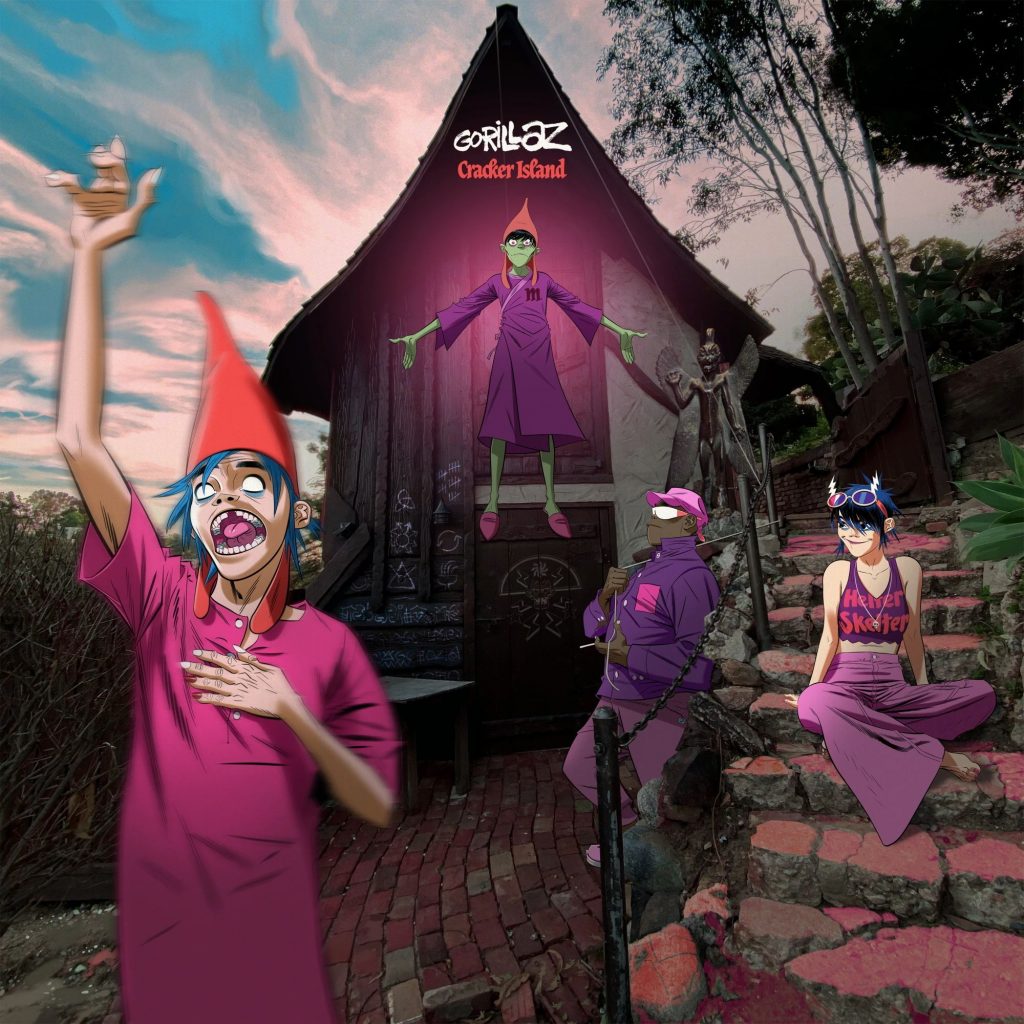 Also in the meantime, Cracker Island is gearing up to be another epicly creative, powerful and emotional album. On top of the three tracks we’ve already heard, there will be collabs with Stevie Nicks, Adeleye Omotayo, De La Soul (on the Japanese release), Bad Bunny and Beck, as well as a surprisingly large number of straight up and down Gorillaz tracks with no collabs. Like all Gorillaz work, both the album and its videos are yet another step up in creativity, innovation and multimedia utilisation for Albarn and Hewlett.

This is evidenced by the most recent “immersive performance” video released by the Gorillaz camp, which was somehow both live and VR, featuring Godzilla-sized likenesses of the band sitting on the buildings of Times Square and playing “Skinny Ape” for a crowd of dazzled skinny little flesh apes (oh to have been in New York on that day). Murdoc shows up at the end, not playing but apparently floating in half lotus and wearing a white suit that looks very much like what the evangelical ministers wore in the 70s. He appears to see all these real world fans as part of his new Last Cult flock and he, their shepherd. That is, of course, until he loses his balance and falls out of his serene yogi pose.

With fans on notice to strap in for whatever is to come from the Gorillaz song machine story-and-message-wise, both the art and the staying power of this band are what’s really impressive. 22 years have bright more and more complex and connected stories, merging the real and Gorillaz worlds in ways their creators likely never dreamed possible back in 2001 and an ever expanding message of both warning and love to humanity. Not bad for an indie cartoonist and the art school twink from Blur.

Cracker Island releases 24th February on all platforms. It can be pre-saved here on most major streaming platforms and various physical copies can be pre-ordered here for North America. Fans wishing to join the Last Cult (a cryptic email list, for current purposes), click here.