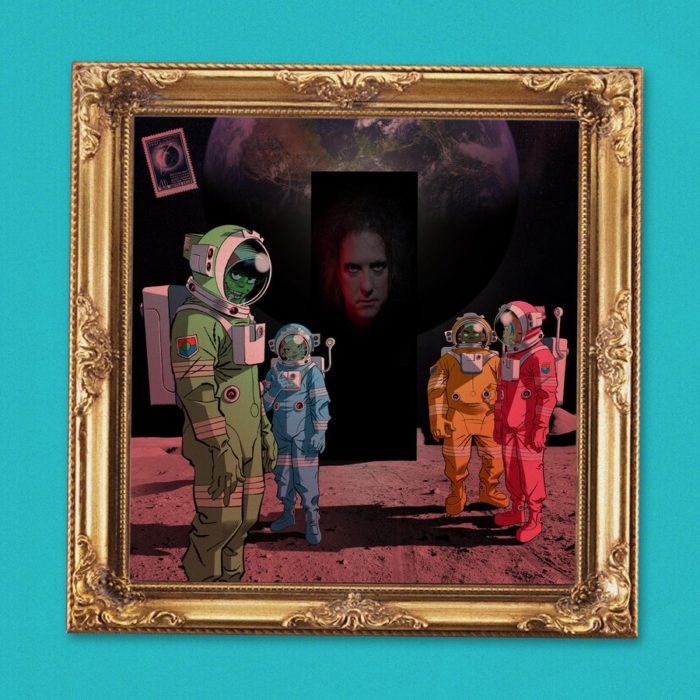 OK that’s it – who else was just completely not ready for the emotional, political, fun and funky ball of wax that is “Strange Timez”? Every track so far on the Song Machine series has been monumentally great, with the collabs all adding something new and unique to  the mix, but this one is truly something else. It’s not to say “Strange Times” is another level necessarily, however Goth King and Cure frontman Robert Smith doing the chorus to this track as the moon…it’s definitely an exciting lateral shift.

As always, the teaser beat for “Strange Timez” appeared at the end of the previous Song Machine track, “Pac-Man” along with a video clip that we now know is Murdoc’s portal experience in the new video. Fans may think they know what’s coming with those clips but just as certain as that clip comes, it’s always completely different than anyone could ever dream.

That haunting, Psycho-or-2001-esque piano sting opens “Strange Timez” and effectively becomes part of the minimal house beat that drives the track. This is probably the raviest a Gorillaz tune has been in a while, the empty space of the track vacillating between being filled with either Smith’s halting. haunting vocal melody or 2D’s spoken word-style rapped lyrics. There are also pauses in both lines where it’s just the minimal tech house beat and the eerie piano.

Three quarters of the way through the track, another keyboard creeps in with a more trackable melody and then all the seemingly random, rave-style sine wave synths converge with that keyboard melody, Smith’s chorus and the odd “strange times” pronouncement from 2D to bring the track to a sort of soft crescendo before its denouement fades all the music back into nothing. Composition-wise, it’s an interesting cross between pop, EDM and classical construction. Smith and Damon Albarn must have had a lot of fun writing it.

“Strange Timez” is also one of the most blatantly political tracks the Song Machine series has seen thus far, although Albarn always makes sure there are healthy lashings of political subtext in every track he does. 2D’s lyrics in the track specifically mention conflicts in Belarus, the dangerous cult of personality that has become the Trump administration, global warming, COVID, diplomatic breakdowns, religious mass control…really everything that’s contributing to this cacophony of tension that are the current “strange times.”

Robert Smith’s perspective in the track is different and one that’s literally miles high. In both the song and the video, he plays the part of the moon, watching all this madness on Earth unfold while “spininng around the world at night.” His lyrics are a little glimmer of hope from the spiritual or philosophical perspective. The current “times” aren’t just “strange” because they’re overwhelming, seemingly negative and dangerous, but because it looks like it’s going to take a massive crisis of humanity to wake up the populous and get us to the next level, as it has so often in history. While 2D is clearly overwhelmed by all the madness he’s in on Earth, the Smith as the moon doesn’t commiserate. He only points out that these are “strange times; to see the light…to turn it on…to be alive.”

The video for “Strange Timez” goes right along with the track, seeing the Gorillaz visiting Robert Smith’s spirit moon in their Konged-out Winnebago to get a much-needed break from it all. Full to the brim with nods to 2001: A Space Odyssey (not to mention a big nod to Noel Fielding’s “The Moon” character on the early 00s British comedy The Mighty Boosh about which Fielding is more than likely thrilled) , Murdoc finds a black monolith on the surface of Robert Smith which turns out to be a trippy portal that takes him right back to Kong Studios. Russel, unphased by it all as usual, takes the Winny over a crater to do moondust donuts while 2D, staring with perplexity at the wonder of it all, seems to be the only one interacting with the Robert Smith moon; they’re having a little chat in the form of the song’s lyrics, and it seems as if Robert Smith is telling 2D that while he may not be able to escape these strange times even on the moon, the eternity of said moon and all things will somehow make it OK.

Noodle seems to be the only one with a purpose in the video, playing a sort of Archer-esque rogue agent character who’s come to the moon with the specific goal of blowing up a billboard on its surface. She predictably has no shortage of Noodle-esque ironic fervor while carrying out her task, either. Throughout the video, evidence of humanity’s presence there over the years is littered all over the landscape. The rover, the first mission’s tattered “claim stake” flag and now this billboard; Noodle’s mission on the moon seems to be to stop mankind’s expansion to the moon as an escape from the Earth’s problems, especially if it comes in the form of capitalism. We should probably fix the problems on one planet before ruining another one or our only moon, eh Noodle?

While “Strange Times” seems to be a bit of a break from the current Gorillaz storyline of Murdoc trying to kill 2D and the band going stir crazy at Kong, Noodle’s little quest will satisfy the canon heads as there’s long been a theory that Noodle is some sort of sleeper cell from a kind of cabal for the higher purpose of mankind. This is one part of the canon that has been wildly speculated on and one that Albarn has kept decidedly loose. There’s more to Noodle than meets the eye to be sure but what exactly she is or does has literally hundreds of interpretations. No matter what, she seems to be a gleefully anarchic force in the universe, making sure the boys in the band behave and striking little blows for goodness and common sense wherever she can. That’s why we love her.

As usual, there’s much more to unpack than meets the eye and ear with “Strange Timez”. The analysis could and likely will go on ad nauseam or at least until the next Song Machine episode. Its main message, however, can be summed up in the last shot of the video. As 2D stares back at the moon with the Winny hurtling towards Earth, his head likely spinning from the nice talk he had with Moon Robert Smith, the surface rotates to expose all the donuts Russel did in the dust. They spell out “Be the Change.”

One last but very important thing worth mentioning about “Strange Timez” is that it’s the last Song Machine track before the full new album is due out October 23. It looks like there will be at least ten more new tracks on the album, dubbed Strange Timez Season 1 so it looks like this collab with Robert Smith was also meant to announce and tie Song Machine all together in its own canon. To check out who will be on the new album (spoilers: Beck, St. Vincent and Elton John??) and to pre-order, visit the Gorillaz Instagram or click the embedded post below.