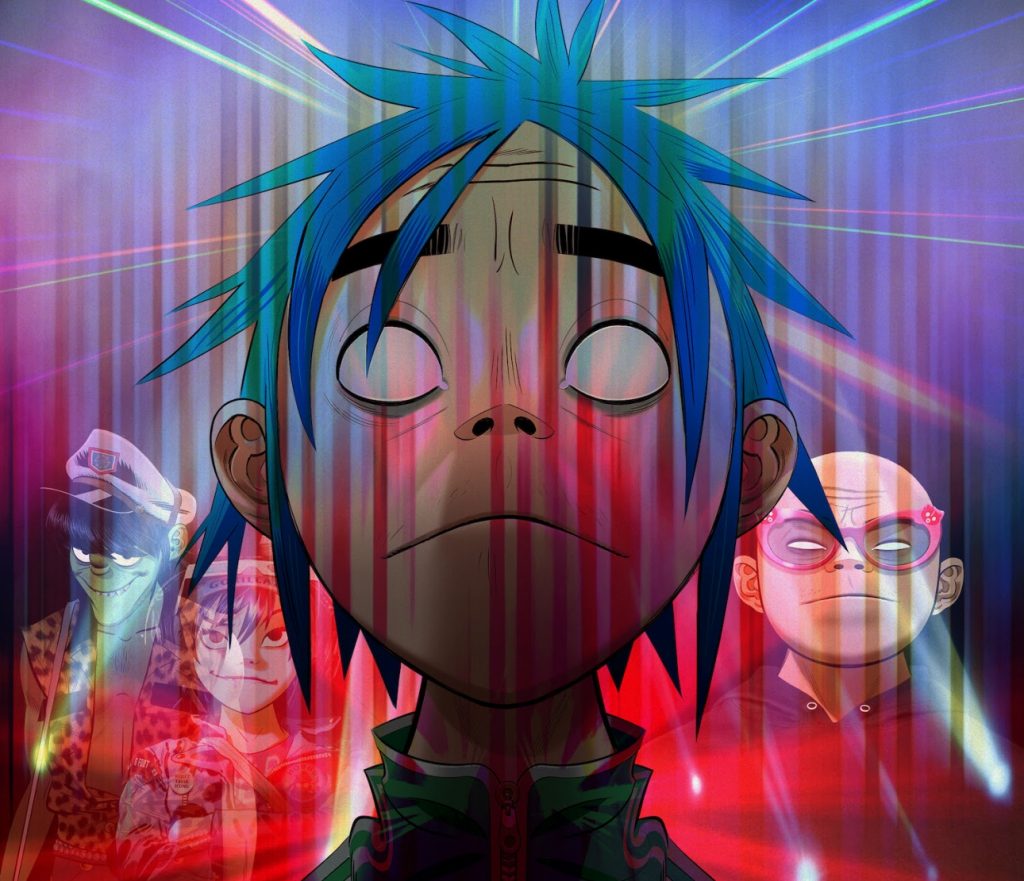 How could we not? The UK livestream site LIVENow streamed the three-performance “Live from Kong Studios” special on December 12-13 (corresponding with different timezones around the world) and the Gorillaz offered an “around the world” experience where fans got to see all three performances and, for over-observant critics like the one typing these words, compare them. To answer a few questions right away, there were indeed three separate performances as each was a bit different, though it’s unclear if they were pre-recorded or actually live. The energy in the studio certainly seemed as close to live as one can get without an audience so at the very least they were fun.

Another question that wasn’t clearly stated in the press before the performances and possibly one of the biggest disappointments of the shows: Song Machine Episode One: Strange Times was not performed in full. We’ll get into the setlist in a moment and how the band made up for it, but it seems which songs were performed were somewhat cherry-picked from the Deluxe edition of Strange Times and were probably largely based on which collaborators were available. We are in a pandemic, after all, and the Gorillaz diaspora reaches pretty far from West London.

Now, those burning questions out of the way, here’s a run-down of the experience and how the shows differed.

One thing viewers were trying to figure out both during and after the Song Machine shows is why the Gorillaz team chose LIVENow as their platform for the livestream. It’s unclear whether LIVENow is among the hundreds of livestreaming sites that popped up out of 2020’s exploding home entertainment market, but the site is still on the smaller side in terms of manpower for running the streams. While it boasts an impressive lineup of live music shows, sporting events and even fitness classes, it seems the nuts and bolts are still a bit rough.

Getting into the stream was unnecessarily fidgety and if you left for a moment it was just as difficult to get back to where you were. Viewers around the world reported the stream itself as being quite glitchy throughout the show, as is exemplified by the bootleg recordings that have been popping up and quickly taken down all over YouTube. Fans who purchased the four pack of tickets that came with a watch party on the site experienced sound problems when they tried to talk to each other.

Overall a bit of a distracting experience that left fans wondering why Gorillaz didn’t choose a larger, more established livestream company with slightly better capability. The fact that there was no sponsorship for these shows might be an answer; filming, staging and micing the shows was likely pretty pricey in itself so if there was no one there to help with the cost, getting a good deal with the site might have been necessary. That said, LIVENow is still a worthwhile site to check out, as it’s got a lot of interesting programming.

Those who didn’t see the shows must have been wondering who would actually show up in the Kong studios for the performances, especially considering our friend COVID. Understandably, artists who do not live on the rock known as England were not able to make it but if anyone knows about how to merge reality and virtual reality, it’s Gorillaz. There were lots of hologram performances from Beck, (“Valley of the Pagans”), Fatoumata Diawara (“Désolé”) and 6lack (“The Pink Phantom). In “The Pink Phantom,” some of the coolest effects of the shows occurred with a hologram of Elton John’s animation from the video. The rest of the artists were on a screen behind the live band with fun effects swirling around them. These were the only bits that were likely pre-recorded.

The guest appearances was one of the biggest differences that could be spotted between shows, as some were not there for the first show but made it for show two and three. There were many more live guests added to the roster after show one, which was probably a bit annoying for Aussie and Asian fans. Most notably, Robert Smith was absent (projected on a monolith like in his requisite video, “Strange Timez”) from show one and then directly after that show, it was announced that he would be appearing in the studio for shows two and three. Fans who bought tickets for show one were even notified of the addition and plied to buy tickets to the following two shows. It felt a bit slimy but it may not have been a purposeful stunt; we have it on good authority that Robert Smith (he is the moon, after all) is not a morning person and show one was pretty early in the UK.

Other guests who were live in the studio were Slaves and Slow Thai (“Momentary Bliss”, only one “slave showed for show one), Lee John (“The Lost Chord), Peter Hook and Georgia (“Aries” – Georgia stayed on and played drums with Gorillaz resident drummer, Gabriel Wallace), Kano (“Dead Butterflies”) and, likely the biggest surprise of any of the shows, actor Matt Berry (IT Crowd, Toast of London, What We Do In the Shadows, et al.), whose berobed recitation of the soliloquy from “Fire Coming Out of a Monkey’s Head” originally done by Dennis Hopper  heralded the the end of Song Machine and the beginning of an “encore” of Gorillaz previous work.

The setlist for all three shows was the same, but as previously mentioned, the performances were not. Eleven tracks were played rom Song Machine with the encore featuring “Fire Coming Out of a Monkey’s Head,” “Last Living Souls,” “Dracula,” “Don’t Get Lost in Heaven” and “Demon Days” were played on a different set that Albarn wandered over to as Matt Berry was doing his dramatic performance. Finally, the Ed Case remix of Gorillaz’s very first single “Clint Eastwood” closed the show down, with one more surprise live guest: Sweetie Irie in what was ties for first place with show three’s “Momentary Bliss performance with Slow Thai and Slaves for best performance of the weekend.

The set for the shows was everything a Gorillaz fan could hope. Since it was supposed to be within Kong itself, the stage and areas around it were strewn with dystopian litter, carrying signs that said things like “stay negative” and “innate rashes.” The horseman’s mask is there on a disfigured mannequin and Russel’s golf cart is parked and flashing its stolen police light throughout the show on stage right. 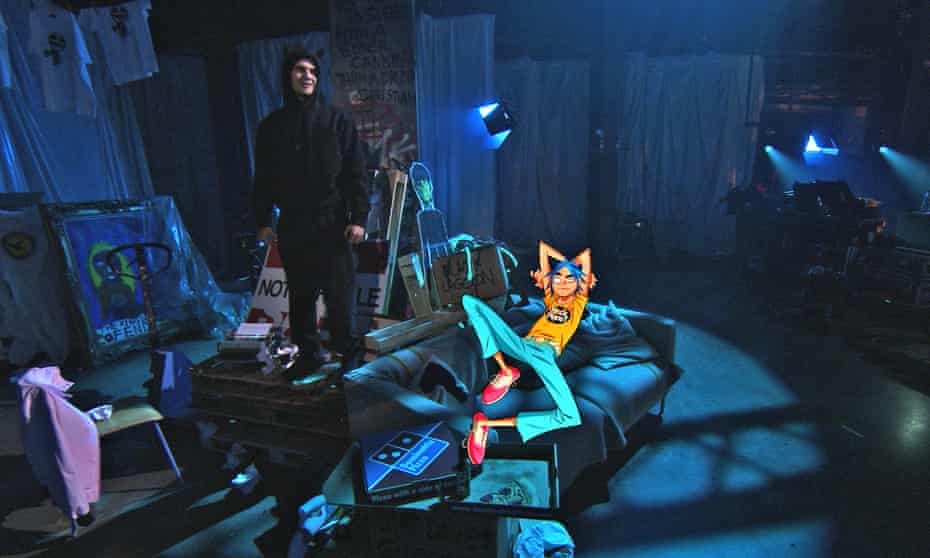 It’s clear animator Jamie Hewlett had a big hand in the set and visual design, as the Gorillaz animations were cut up to fit the show on the main screen but also strewn all over the set. Elton John’s animation plays the piano downstage from Albarn, Noodle and 2D lounges on couches and Murdoc even pops out of a gear box for “Momentary Bliss.” It would make sense that the best set for visuals for Gorillaz would be a closed set, so it’s almost not a pity that they couldn’t be in person because this type of animation and blocking just wouldn’t be possible in an arena.

In terms of the actual live performers, it looked like everyone in the band as well as the singers and percussionists from Albarn’s orchestral side project, Africa Express, had a blast. With all his favorite toys like the melodica, multiple vintage mics and even more vintage keyboards, Albarn made a job of getting in the faces of other performers (inciting more than a little discomfort from Robert Smith), skipping around the set and invading the viewers’ personal space via the camera lenses.

A few kinks were worked out in show one, such as syncing up with the animations, new live performers coming in too hot (the first performance with Slow Thai was downright cringe) and getting tempos right. Most obviously, during the “Feel Good Inc” remix, Albarn opted to sing 2D’s part live but it was clear he wasn’t used to the ultra-fast 170-ish tempo of Ed Case’s speed garage beats so Sweetie Irie went over and sort of slyly conducted Albarn until he was back on beat. Far from being disruptive, the moment was sort of sweet and showcased the kind of rapport that’s been built among the regulars and collaborators of the Gorillaz family and likely also among the cast and crew for these shows.

Unsurprisingly, the finale show that was set for GMT was the best of the three. Now having dialed in the quirks of set, filming, musicality and tempo, Gorillaz and friends could relax and really put on a show. Robert Smith knew what was coming from the relentlessly peppy Albarn and so now danced along, all members of Slaves were present and accounted for during “Momentary Bliss” so the even more peppy Slow Thai had more bodies to ricochet off of. Matt Berry stepped up his Batt Berry-ness, appearing seemingly out of a hole in the floor and throwing his hood off before he trilled and projected his way through the monologue in a goosebump-inducing performance.

At the end for the last “Clint Eastwood” performance, all the live performers joined the band onstage and, with the crew eventually joining them, made a veritable mosh pit around the post-apocalyptic set. The joy in the chaos: so very Gorillaz.

Despite the few site glitches and working out the nerves on the first show, the Gorillaz “Song Machine Live” shows have been a brilliant test case for these kinds of livestream shows, which will likely get increasingly more popular. They’ll also serve as a benchmark for production, as we saw what’s really possible in this kind of venue. Still perhaps second to an in-person live experience, there are nonetheless lots of possibilities for impressive spectacles on a closed set and while we’re sorting the world out, it’s nice to know that Gorillaz were more than prepared.

In terms of catching the spectacle retroactively, LIVENow is offering the official streams on replay on its site for about the same cost as a ticket and they are decidedly less fidgety so there’s a feather in their cap. There are lots of clips on YouTube (as is exemplified above) as well as full-length renders of shows two and three but bear in mind they are not authorized by Gorillaz or LIVENow so if you bookmark them to watch later and they’re gone, don’t be surprised.